“I love it when a plan comes together.”

On Monday, I drew up some plans for my next project: a rod back chair. 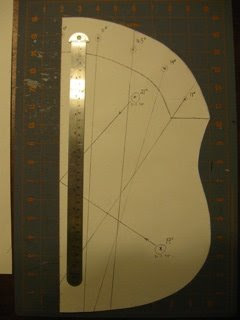 Some woodworkers look at windsor chairs, and think they’re hard to build. Building windsor chairs isn’t difficult, but it is different from other “normal” woodworking. Non-woodworkers don’t necessarily think Windsor chairs look hard or easy to build; they have nothing to compare it to. I think the different way of working which windsor chairmaking requires fits well with my longing to extract order from chaos, and my generally intuitive way of solving problems.

The way windsor chair plans are laid out and used is also different from joined furniture plans. The plans tend to be very compressed. A rule of thumb in Information Theory says that “information (as opposed to pure data) is any difference which makes a difference.” By that measure, windsor chair plans are nearly pure information: they record only the aspects of a chair which are important, and only those which differ from other chairs. Anything not included in the plans is either not a critical dimension, or it’s derived from a partially finished chair in the same way it’s done for similar chairs.

In most woodworking, the order of the day is “square corners and flat surfaces.” The first step in a project is producing boards with all surfaces perfectly flat, and all corners exactly 90 degrees. Throughout construction, these flat surfaces and right angles act as references for various measurements. If you’ve done your job, most of these reference surfaces are interchangeable. Many finished projects retain these square angles in the finished construction.

On the other hand, a windsor chair has only one flat surface: the bottom of the seat. You usually can’t even see it, which is probably why it’s left flat. Most of the parts are never transformed into a flat board: they’re split out of logs and turned directly into legs, stretchers, spindles, posts, rods, or bows.

Since the seat is the only flat board used in a chair, it is the only natural reference surface. Because of this, windsor chair plans are centered around the seat. A seat pattern defines the outline of the seat, and the location and angle of every stick which protrudes from it.

Usually, none of the drilling angles for the legs and stretchers are included in a plan, or they are included only as a sanity check. When building a chair, you derive the required drilling angles and stretcher lengths from the partially finished chair instead of using predetermined dimensions, so your chair will fit together even if the legs aren’t installed perfectly.

This is another difference between windsor chair building and “other woodworking.” In most woodworking projects, you (ideally) construct a number of identical interchangeable parts whose dimensions are all fully specified, and then you assemble them. If you mess up a part, make a new one. You almost never take measurements from a half-finished project and build a part which fits. That would be like hand carving the missing piece from a jigsaw puzzle after it’s almost finished.

So, how do you make a chair plan? I don’t know. I mean… I don’t know how other people do it, and no one ever taught me how, so I figured it out. I may have gotten it wrong.

The biggest conversion task is angles. Measured drawings generally show 3 views: top, front, and side. You can easily measure the rake and splay angles of the legs and spindles from the front and side views of the chair, but these are not the angles used when drilling holes for a chair. Instead, you use an incident angle, which is the angle at which the drill bit enters the seat, and a sight line which tells you which direction to point the drill (the bit is always perpendicular to the sight line).

Apparently Drew Langsner has charts in the back of one of his books, which convert rake and splay angles into incident angles and sight lines. Unfortunately, I don’t have a copy of that book; it’s out of print and expensive. But I do have a bachelor’s degree in math/computer science, which was even more expensive. So, in lieu of a set of tables, I wrote a script.

Unfortunately, now that I’m “done” with my plan and I’m sitting down to write about it, I see that my script is not giving entirely consistent results. Doh! I’ll have to go revisit that before I post a link or build the chair.

I ran into another complication with the drawings I’m working from. This chair has its seat at a 3.5 degree angle in relation to the floor, but the drawings depict everything with the horizon set to the floor, and not to the seat. There was no way to measure the “front” angles properly with relation to the seat. So my script had to take that angle into account as well.

The result of these labors is the plan shown above. As you can see, it only depicts one half of the seat; the other half is a mirror image. I follow Brian Cunfer’s practice of using half-patterns, to avoid screwing up half of a pattern and building asymmetrical chairs.

With only a seat plan, there are clearly some undefined aspects of the chair, but only some of them are determined in advance. I’ll have to calculate the length of the legs to achieve the proper seat height, but the shape of the turnings isn’t very important from a structural standpoint as long as the leg is thick enough at the joints. The stretcher lengths and angles are measured from the position of the legs in the chair. The post lengths are chosen from a design perspective, and the spindles are made long enough to fit the bent rod. The rod itself needs to have the proper length and curve to meet the spindles and bows properly, but if I’ve calculated the spindle angles correctly they’ll match the measured bow from my drawings.