On Saturday, five families met outside Hofbräuhaus for a family bike ride on the South Side trail. It was the first “real” ride with Martine and I on the tandem, and it was instructive, if not very strenuous. But first… 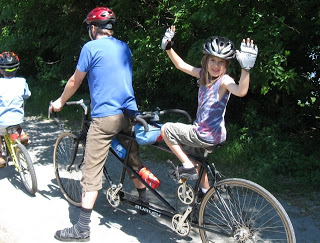 The tandem didn’t need much work to make it road worthy. I replaced both seat post clamps, which were cracked. A shorter stem made the front end fit a lot better for me. I rewrapped both handlebars and replaced a few cables and the rear chain. I changed the larger front chainrings from “two adults go fast!” to “one adult needs help carrying a kid.” Finally, I mounted wider tires: Panaracer Paselas, 32mm wide. I might be able to fit fenders above these tires, but probably not (and this might not bother most of you anyway).

Martine and I talked about how riding the tandem together would require cooperation from both of us. After a few laps around the block in the morning, it was clear that we needed to adopt some short, clear signals to aid communication.

I try to say “shift” when I’m about to ease up on the pedals to change gears, but truthfully I can hardly feel Martine’s pedalling unless she’s trying to backpedal, or standing up to pedal (“Coast!”).

After our test ride around the block, we packed up the car with the tandem and Marla’s bike on the roof, and drove to the Eliza Furnace trail parking lot. We rode over to Hofbräuhaus, and I bought a pair of gloves at REI that didn’t smell like “homeless person.” 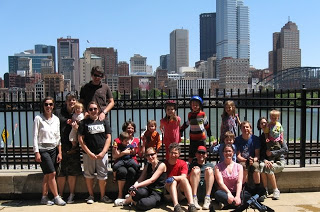 Soon, everyone arrived and we set off towards Station Square. It quickly became apparent that we on our tandem, and Daniel and Levi with their trail-a-bike “brought guns to a knife fight.” Martine and Levi were antsy to start riding quickly, but everyone else was sensibly keeping pace with the other young kids who rode their solo bikes.

The ride was uneventful, but Martine wasn’t satisfied going as slow as we were. Next time, she’ll bring her solo bike too, if we can figure out how to get all the bikes onto the car.

At Station Square, we hung out and looked at the fountains, and generally got in the way of racer wannabes barreling through the pedestrian area at unreasonably fast speeds. This is a great place to take a panoramic picture of downtown, and some tourists were happy to do us the favor. (They didn’t even steal the cameras.) 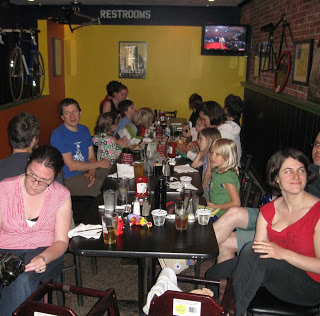 On the way home, Daniel and I decided to leave the rest of the group in order to indulge the kids’ need for speed. We took them across the Smithfield Bridge and up the Eliza Furnace trail, then across the Hot Metal bridge to meet everyone else at Over The Bar (OTB), Pittsburgh’s first bicycle-themed bar.

Martine was clearly in need of food or sleep on the way back. We made it back without any serious incidents, but that portion of the ride taught me she has far more opporuntities for mischief on the tandem than on the trail-a-bike: she can reach my pockets (wallet), my back (poke, poke), and all sorts of things she shouldn’t be fiddling with.

OTB is a nice place, I’ll probably go back. I work only a block away… why didn’t anyone tell me East Carson St. was under major construction? I feel lucky to miss that traffic nightmare two times a day five times a week. Bike parking at is limited to standard on-street parking meters and telephone poles, but at least it’s still easier than parking in a car. This year’s EEBC Keg Ride ended at OTB as well. I have no idea where they parked 400-500 bicycles for that!

At OTB, the food is fine and the beer selection merely adequate, but it has a friendly atmosphere. It seems to be all-inclusive in terms of the type of cyclists it caters to. They serve hamburgers with peanut butter, but also veggie burgers and salads; Pabst Blue Ribbon pounders, but also local micro brews. The meals are all named after stereotypical bicycles, cyclist categories or local outdoors/activist groups. I believe I ordered the Tour de Greece, a somewhat anatopistic meal (don’t worry, I had to look it up too).

After everyone ate, we went back to the fountain at South Side Works to let the kids play and cool down. It was all fun and games until someone found an eye… I mean, until Levi fell and hit his head. No one suffered any permanent damage, as far as I know.

We rode back to the car, and Martine agreed to ride all the way home with me on the tandem. We took one of my normal commutes home from work on the roads, without incident.

Overall, I think the kidback tandem setup presents a greater opportunity for us to go on longer rides together. It is a bit easier to pedal than the trail-a-bike, but the handling is very different than either a solo, or the trail-a-bike. The length of the bike makes me feel like I’m strapped to the front of a locomotive, and it’s extremely front-heavy. I hate to flog this particularly dead horse, but I think the tandem would really benefit from a much lower trail geometry (a greater fork offset). I’m used to low trail on my solo bikes, and even tandems with an adult on the rear are better off with lower trail to compensate for the weighted front end.

Oh yeah: it is possible (but difficult) to get the tandem in and out of the basement. I carry it upstairs nearly vertically with the front seat tube over my right shoulder, and carry it downstairs backwards in the same orientation.

There are a few minor kinks to work out in my front end setup, but I look forward to more rides with Martine this summer.