Here’s my latest DBA Army: Mountain Indians, II/2. According to the DBA army book, these guys were an enemy and an ally of the Alexandrian Imperial army (II/15), and an enemy of the Skythians (I/43a). They’re also an enemy of the early Seleucids (II/19a), which I can morph my Alexandrian army into. 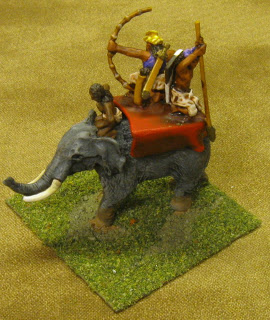 The figures are 15mm Museum Miniatures, and are available in a DBA army pack. I painted everything except for the 2LH General element. The figures are slimmer and shorter than my Essex guys. The horses are downright pinheaded. I haven’t stood them up next to each other yet but I think these guys will look tiny. The quality of the sculpting is good overall, but their faces look somewhat uninspired, with mere suggestions of eyes. I quite like the bows.

My only complaint with the army pack itself is that there was no clear way to distinguish either the Elephant or the Light Horse as a general element. The Elephant came with a parasol, but nothing obvious to mount it on and no general-like riders. The light horse figures were all identical.

According to the DBM army list book, the Mountain Indians armies represented by this army list are various tribes living in the mountains in the corner of what is now Pakistan, Afghanistan and India. I’ve been unable to find much information about these people, so I’m not sure whether the sculpts are accurate.

This was a fun army t 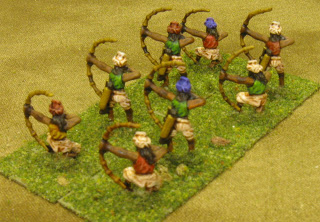 o paint, for several reasons. As I’ve said before, I’m getting a bit sick of painting clown suits, so this was a welcome change of pace. These simple solid color outfits are a lot easier to shade with dry brushing and layering instead of ink.

This is the first time I’ve painted dark-skinned humans, and I think it turned out pretty well. I’ve seen Mountain Indians painted anything from “got a bit of a tan last weekend” to “how much more black can it get?” and even a few “wow, that’s way too pink to be human.”

I’ve also been unable to find much information on what color their clothes should be painted. General recommendations seem to be to use readily available dye colors of the time, with their trousers in “your favorite color of off-white.” The freedom of not worrying so much about whether I’m getting it right makes it a bit more fun.

Their shields were apparently faced with cow 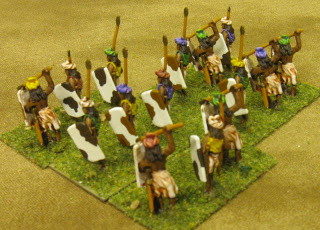 hide, and so most painters use a holstein-like spotted color scheme. I’m not sure that makes any sense: were holsteins available in ancient India? I’d expect something boring and brownish, but the spots look a lot better.

This army was also very fast to paint, but it exercised some techniques I hadn’t used much lately. Unfortunately the photographs didn’t turn out well, they aren’t focused properly.

With 4 Auxilia and 4 Psiloi, I’m not entirely sure how this army is supposed to stay alive. I guess we’ll just have to try it out and see. I expect I’ll take a little break from painting DBA armies, but hopefully I’ll get some time to play them instead.