Apparently, at some point I became a much faster painter than I used to be, without getting any worse at it (in fact I might even be better). I’m not sure when that happened, but the “how” probably has something to do with doing a lot of painting, instead of finishing fewer figures more meticulously. Practicing the same techniques many more times makes me both faster, and I’d say slightly better, than I was before.

In any case, here are some more figures I’ve painted since I finished the Later Achaemenid Persian army.

First is a group of Middenheimer bowmen, for

Mordheim. I already have crossbowmen, but crossbows are really expensive in Mordheim, and of course the only figures I’ve ever had die after a match are the crossbowmen. Now that I have bowmen instead, the crossbowmen are guaranteed not to die for fear of being replaced with cheaper minions!

These figures are Games Workshop Empire Bowmen. I would have gotten a box of the men-at-arms, but they didn’t have any, and these are close enough. They’ll add a bit of variety to the warband. I painted the blue and green a bit lighter, with lighter highlights instead of darker shadows.

Next up is a Sister of Sigmar. This is another Mordheim figure, a 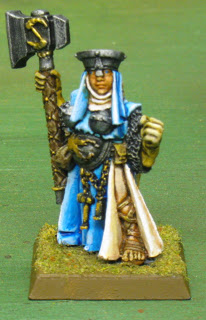 metal casting. I got about 5 of these in a big box of bits from a Games Worksop bits sale. Andy is painting a Sisters of Sigmar warband, so I decided to paint a duplicate of one of the figures to demonstrate the techniques on the same figure he’d be working on.

Andy chose the color scheme. I wouldn’t have used this blue, but it turned out a lot better than I expected. In these pictures it seems to almost glow, it’s a lot brighter than in real life. I need to work on my inking technique on these larger figures, I often end up with a mucky, messy look instead of good shading (see around her leg). After really messing up the blue with ink, I redid it. Now it’s shaded by hand with multiple layers of similar colors to build up the gradient.

I have no idea what I’m going to do with this figure. Truthfully, there are some much nicer Sisters of 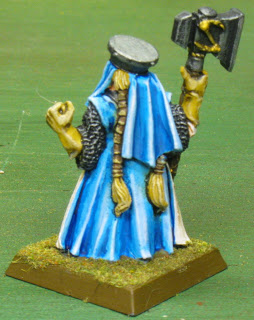 Sigmar figures, I wish I had five copies of those instead of this one.

At this point, Andy has tracked down at least one of every Sister of Sigmar ever made, as far as we can tell. He’ll have plenty of options for building a warband; not that Sisters give you many options anyway: “Would you like one hammer, or two hammers?” Painting up the warband should give him plenty of time to decide whether he actually wants to continue painting or not.