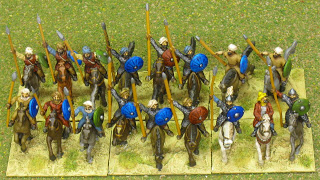 The army is evenly split between mounted and infantry: a cavalry core is supported by warband and bows (or psiloi, if that’s the way you roll).  The army list I’m most likely to play is: 5x3Cv (gen), 1x2LH, 4x4Wb, 2x3Bw. 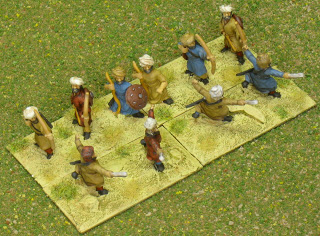 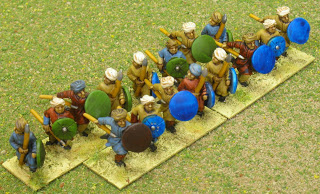 I liked my color scheme until it became too montonous.  I intended to go primarily with offwhite/tan, grey-blue, and red, and fill the rest in with various browns. But when it came time to paint some shields, I was at a loss.  The brighter blue wasn’t too bad, but I think the green was a mistake.

Luckily I don’t have strong feelings about this army.  It took a while to get motivation to paint it, and now that it’s done I’m happy that it’s finished and not upset that it’s not what I’d prefer.

I used the same basing technique as on my Early Bedouin army.  The metal bases have a layer of spackle with sand dusted on top. Then I paint them with Vallejo Middlestone, followed by Yellow Tan and finally Buff.  It’s a bit weird, but it ends up working well especially after I apply the static grass patches in green and yellow.  I based the Bw, Ps, and LH elements prior to painting them, but based the Cv and Wb after they were painted.  Spraying with varnish keeps the sand in place before painting the bases, which is convenient.  However, overall I think the basing on these is a huge pain in the ass.  I’m not likely to continue with this technique in cases where I’ll be using grass-like flock over the entire base.  I’d prefer to do selected spots of dirt/sand on an otherwise grassy base.  It’s a lot less messy and requires less touchup than applying spackle to bases with already-painted figures. 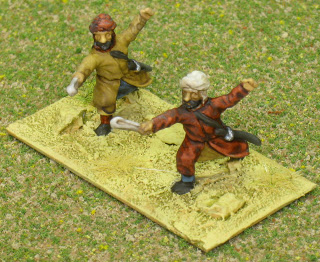 I tried another new technique with these figures, and I’m very happy with the results.  The red tunics and head wraps are done with Vallejo Transparent Woodgrain, a dark maroon-red.  I applied this in a single coat over the white-primed figure, and it did an excellent job of darkening the shadowed areas while leaving the highlights lighter without any additional inking required.  Adding a bit of water to thin it out produced no ill effects.  This is truly a transparent (or translucent) paint: adding more layers of paint darkens the color significantly instead of reaching a final tone the color of the pigment.

If I were picky, I’d change a few things about this army:

However, I’m not picky.  Lucky me!

I still have an arab tent camp to paint, but otherwise this army is ready to bring to Historicon 2010.