Although I haven’t made a new post in a month, I’ve still been busy.  Here are some pictures of my latest DBA army: I/24, Hittite Empire. 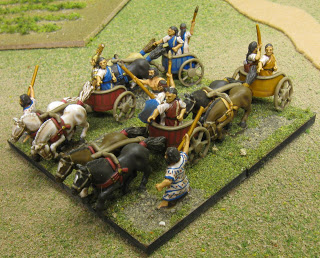 The figures are almost all Essex, but this was a semi-random selection of figures, and not from an army pack.  I bought this as a “not for the squeamish General” deal in the bazaar on the Fanaticus forum, so the figures are not all as appropriate as they should be; however, it’s close enough for me.  I’ll get another copy of the army if I like it enough.

Specific figure selection problems: Most of the spearmen are royal guards, and the rest are charioteers instead of ordinary spearmen.  I got a pack of generic biblical-era hordes for the horde, and got the chariot runners from JM, who also bought one of these semi-random army packs.  All of the figures with beards are somewhat inaccurate unless they’re interpreted as allied forces, since Hittites were apparently known for shaving their faces. 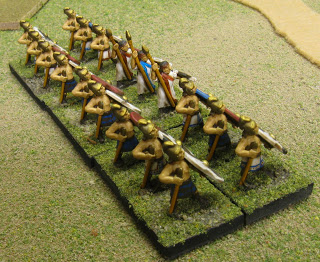 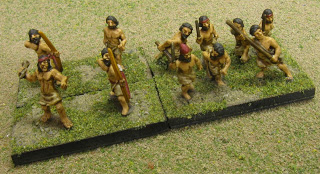 For color selection, I mostly referred to the Osprey Hittite Warrior and Ancient Armies of the Middle East books for inspiration.  They show white robes with red and blue decorations at the edges, and skirts on the guards that use brown and blue stripes.  I also read the appropriate WRG reference, which suggested shields, clothes, and chariots could be colored/painted instead of using natural leather and cloth colors.

I decided on red and blue as the main colors for the army.  Unfortunately this makes them look very similar to my Arab Conquest guys, because it uses “safe” colors I’m comfortable with.  I’m going to have to push myself next time around.

For shading, I primarily flat-painted everything, added detail and some minimal shading, and then applied Army Painter Strong Tone.  It does an adequate job on the white, but it’s certainly not ideal. White is hard however you do it, and I’d rather not spend much effort on it. I pretend it’s just before laundry day: how clean are soldiers going to keep their kit while on campaign, anyway?

I really like the effect Army Painter has on the horses, flesh, and offwhite colors.  It certainly gets adequate results quickly.