I finished painting another DBA army. This is a 15mm Skythian army, DBA I/43a, with all options.

These Skythians portray a skill that definitely falls outside the realm of the Jack: riding a horse with only a horse blanket, before stirrups were invented, while using both hands to fire your bow, and simultaneously avoiding being killed by your enemy. 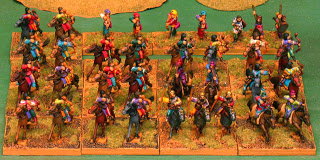 The bulk of these figures are from a Falcon Figures DBA v1 army pack. The two stands of light horse with riders facing forward and the Auxilia are Essex. The Falcon metal was very brittle, so I mounted these on thick Litko Aerosystems plywood bases with plasteel on the bottom, to pick them up without touching the figures. I’m not that happy with the base edges, I’m more of a thin base sort of guy. 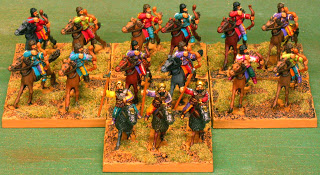 The general can be either cavalry (3Cv) or one of the light horse (2LH) elements. Just like in real life, it’s hard to tell who the general is. Skythians were famed for their hit and run horse archers, and in DBA the army can be fielded with all 12 elements as light horse. This can make them very difficult to control. I think they might also work better on a 30″ board instead of 24″, for extra room on the flanks to avoid the “end of the world” phenomenon.

Here, the Essex light horse figures are in the rightmost column. The Falcon horses were separate from their riders, which made them easier to paint and then assemble later. I epoxied the riders on, after clearing a spot down to bare metal on both parts. The epoxy is transparent, and not really visible even where there’s too much. In fact, I used epoxy on some of the bows to help prvent them from snapping off as well.

I used Essex figures to fill in the figures missing from the DBA v1 army list, to bring it up to DBA v2 standards. I was surprised to see the skins on the backs of the Essex light horse: I thought they all rode with saddle blankets. Reading about them in the Osprey book, it turns out those are “the flayed skins of their enemies,” thus the general lack of hair. On the other side of the horse, there’s also a scalp. The Falcon figures were portrayed as much more civilized.

Here is one element of auxilia (3Ax, Skythian javelins) and two elements of psiloi (2Ps, the archers). The auxilia are Essex figures.

Unfortunately I didn’t get any female horse archers. Apparently they rode side by side with the men, which would be wonderful to portray if the figures were more readily available. Skythians wore colorful tunics, with decorative stripes down their arm and leg seams, and around their necks, and goofy Smurf hats. I might have preferred to see more different horse and rider poses for the Falcon light horse, but they’re so colorful that it hardly matters.

I had fun painting this army, and I’m quite happy with how well it turned out. When I finished, I decided not to paint another DBA army for a while, but I think I’ve already changed my mind.

But after I finish painting a few DBA camps, I’ll most likely be painting fantasy naval vessels for Uncharted Seas.

These days it seems hip to say “Steel is Real,” but I’m not a big fan of this phrase. Carbon fiber, Aluminum, and Titanium are also real, of course, but the intended meaning is that the “feel” of riding a bike with a steel frame is better than the feel of riding frames made of other materials.

Most of the people who say “steel is real” are either riding 25 year old crappy ten speeds with gaspipe tubing, or modern steel frames made with thin walled but larger diameter tubes. Neither of these classes of bikes have the “steel is real” feel. Personally, I ride a 25 year old mid-range ten speed with high end gaspipe tubing, which is to say, not a bike with a “steel is real” feel. In fact I’m not sure I’ve ever ridden one of those bikes. Maybe it would be great, but would it be worth the money to find out?

That said, I do still prefer steel frames. I had a lot of fun browsing Busted Carbon, a blog dedicated to images of broken carbon fiber bike frames and parts. Reading that site provides one reason why I prefer steel.

Aluminum and titanium also break more quickly than steel once they become fatigued. I’m not against riding an aluminum bike in theory. My main problem with aluminum frames is that they’re ugly. Actually, so are carbon fiber frames, but that’s not my primary motive with those.

I figured out how to push “painting miniatures” into the “thing I do now” slot: I just needed to listen to music or movies, and that made all the difference. I painted my second batch of 4 Middenheimer figures in no time at all, compared to the first 5. 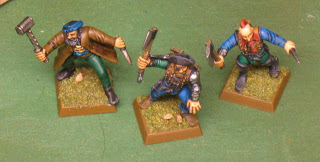 After actually playing Mordheim, I decided to adjust my warband somewhat, and this required a tenth figure: Mack is on the left in this picture. In the center, One-eyed Mitt is named after his eyepatch and gigantic left hand. Mick is on the right. 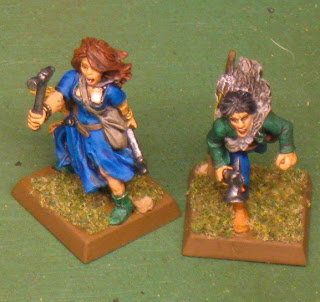 These two figures are metal Middenheimer Youngbloods: Marion and Mike, aspiring carpenters. The metal castings have a lot more detail than the plastic figures, but these ones turned out not to be harder to paint.

These are the Henchmen: the no-name dudes who are most likely to die. The two on the left with hammers were painted more recently.

As far as Mordheim the game goes: we’ve played twice, and we enjoy it. It’s definitely a Games Workshop game, and can be abused if you let it. We’ve been playing 3 player scenarios, and we end up with a lot more casualties than I expect we should.

One of the good things about Mordheim is the fact that the rules are now freely available for download from the Games Workshop web site. The figures aren’t really available anymore for the most part, but you can use just about any figures you want, for them.

Several years ago, I bought a 15mm Essex Miniatures Alexandrian Macedonian army for DBA. This is the army Alexander the Great used to conquer “the known world.” I wasn’t particularly interested in Alexander the Great, but he was a contemporary enemy of the Later Spartan army I already had. Conquering the known world tends to accumulate enemies, so there would be plenty of options for fighting reasonably historically matched battles with these guys.

Except for one thing: no one else actually plays DBA. At the very least I’d need to paint all the armies and bring all the terrain. So when it actually came down to painting the army, I basically finished the two Psiloi elements (two foot bowmen each, on the flanks) and stopped.

Now, years later, I’ve started painting again. I decided to sneak a few of Alexander’s troops in while I was painting my Middenheimers, but then I ran out of Middenheimers to paint, so I just finished these instead. 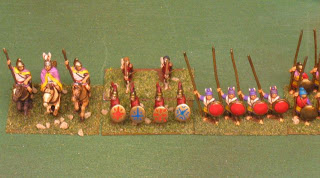 Alexander leads the cavalry charge from his right flank. Light troops link the cavalry to the pike block in the center, and prevent them from being encircled.

Wargamers tend to be pretty picky people. You can’t paint your American Revolutionary War British troops yellow without being ridiculed, for example. So I spent a lot of time researching what color Alexander’s troops should be painted. But I discovered something interesting: this happened so long ago, no one really knows. In the Ancients period, people don’t seem to be all that picky about getting the uniform colors perfect.

Alexander was a successful conqueror, so many of his documents survived long enough for historians to write about him in the following centuries. We know where he went, how many troops he had, and how they fought. But apparently no one bothered to write down what color the uniforms were. There are a few sources useful to extrapolate uniform colors, but there are only a handful of examples, and their pigments have surely changed color in the last 2300 years.

So, it’s impossible to tell whether all of Alexander’s pikemen were dressed in lavender with yellow stripes, or whether this was reserved for only certain troops, or special occasions. In any case, everyone seems to agree that Alexander’s uniforms were quite ugly.

The pike block in the center was the backbone of Alexander’s army. It formed the anvil against which the Cavalry’s hammer slammed the enemy.

While researching uniforms, I’ve learned a lot more about Alexander the Great’s major battles and overall conquests than I intended. It has been interesting.

On the left flank, more cavalry prevents the enemy from encircling the pike block in the center.

Alexander’s recurring major enemy seems to be Darius II, king of the Persian empire. He had huge numbers of troops, and almost always outnumbered Alexander (sometimes by more than a factor of 10). But Alexander always won because of Daruius’ weakness: he was very eager to run away whenever he saw Alexander anywhere near him, and the rest of his troops followed him even when the battle was going well.

This makes it difficult to accurately wargame battles between Alexander and the Persians, without making it seem contrived and broken. “Roll a die to see if Darius runs away this turn” isn’t very fun. DBA sacrifices numerical accuracy for playability: all armies are represented by exactly 12 elements (my army above contains a few different options that I’d choose 12 from before I started a game).

Hopefully I can convince some unsuspecting newcomers to play a game or two of DBA. In the mean time, I’ll start painting another of Alexander’s enemies: the Scythians. Horse archers, anyone?