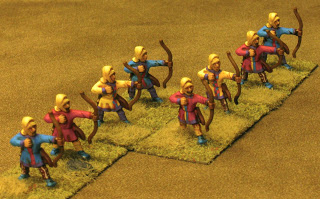 At Legions today, we played Basic Impetus. This is a freely downloadable introductory version of the Impetus ancients miniatures wargaming rules. Rick and Jim played Polybian Romans, and Larry and I played Carthaginians. No one had really played the rules before, but at least Larry read them before we started.

The model basing uses the equivalent of 4 DBx sized bases for each unit. This is similar to Ancient and Medieval Warfare (AMW, which I also haven’t played), except you never need to remove bases so they could be permanently based on larger bases.

I couldn’t really field any proper armies without painting a bunch more stands, but I could fake it so we can play enough to decide whether to paint enough bases for two full armies. The common basing with AMW, also based on multiple DBx bases, would make this a useful way to encourage painting more elements. Incidentally, Command and Colors: Ancients also uses 4 blocks per unit, so with enough elements painted up I could play C&C:A with miniatures as well.

The Impetus rules are partway between highly detailed reductionist rules like Warhammer Ancients, and the extremely abstract DBA. Activation is IGO-UGO and every unit can be activated on every turn. Units have a few stats: Type, Move, VBU (both hit points and combat effectiveness), Impetus (combat bonus in the first round of combat), and VD (victory points for killing the unit, basically).

If the unit has a ranged weapon, it’s listed; otherwise all other weapons and armor are abstracted into the VBU number. Unlike DBA, javelins and slings are considered ranged weapons and not “close combat.” Some unit types such as skirmishers and light cavalry have special rules to fit their historical use, but for the most part everything acts fairly uniformly based on its stat line.

Movement is “normal” with one exception: when you meet enemies you must not line up exactly with the enemy units. Instead, you always overlap the lines partially on each side. This seems odd, but it ends up working well in practice: most combats end up with single overlaps, but no fights give you double overlaps.

When shooting or fighting, you roll a number of d6 equal to your VBU plus appropriate modifiers; each 6 or two 5’s are a hit. Those hits aren’t immediately applied to the enemy unit, but if a unit receives any hits, it must make a cohesion roll modified by the hits received. Failing the cohesion roll causes “real” damage by reducing your VBU for the rest of the game (or until you run out and rout).

The two-step combat system is probably the most fiddly part of the rules, but in practice it works well enough and isn’t too complicated. I think the whole “effectiveness equals hit points left” thing is based on the fact that historically, casualty rates in melee combat were very low, and almost all casualties were caused when one side was running away. The most important thing is to not run away in the first place.

In the game itself, I controlled the right flank with 2 units of Light Cavalry, 1 unit of Cavalry, 1 unit of Warband (strong light foot) and 1 unit of skirmishers. At first I did well: I was rolling lots of 5’s and 6’s, and pushed back the Roman flank. But later, the Romans started hitting me back. I kept on rolling 5’s and 6’s for cohesion tests, but I’m supposed to roll low on those, so I took heavy casualties. Eventually all five of my units were killed, and when one of Larry’s spearmen joined me, the game was over.

Overall, I enjoyed the rules and I expect Frank and Andy might like them a better than DBA. They aren’t as “weird” as DBA: you get to move all your units, you throw big fists full of dice, and you don’t need to remember a pantsload of seemingly random combat result tables. I’m hoping Daniel would still enjoy the more chess-like DBA, but I’m also hoping he ever has a chance to play it again…

The general character of the game itself was what I’d expect while learning a new rule set. There was a lot of “lively discussion,” rulebook consultation, and getting things wrong. The battlefield looks more impressive than a DBA game because the units are larger, even though there are fewer of them.

I’d like to give these rules a try, but first I’ll need to work up some armies and build some sabots (large bases to hold the individual stands) to make things easier to move around.