Here is my latest DBA army: III/40d, Norse Viking and Leidang.   JM and I specified the 15mm figures for two Leidang armies (one for each of us) from a mix of manufacturers: Khurasan, Legio Heroica, and Black Hat.  Although I don’t think the figure/pose selection is perfect for the period, it’s close enough for us and I am very happy with the resulting army. We didn’t buy all army options, only those we’re most likely to use.

This obviously does not look like an ordinary Viking army, because it isn’t.  We chose figures for the mid to late portion of the (d) army list, so the 12-13th century. The selection was based on a few sources: Osprey’s The Scandinavian Baltic Crusades and Medieval Scandinavian Armies (1), as well as WRG’s Armies of Feudal Europe 1066-1300.  Scandinavians in this period looked basically like Southern Europeans of a few hundred years earlier, except possibly hairier, more warmly dressed, and with fewer horses.  I’m a bit dubious about the hair; personally, I’d start shaving if I needed to wear mail armor regularly.

I’ll go over the individual manufacturers with the pictures below.

According to the DBM army lists, the auxilia and psiloi represent Finnish levy troops.  Although these aren’t Finns, we liked the figures enough to call them “close enough.”  These are Black Hat Lithuanian/Prussian axemen, spearmen, and archers.  These and the bowmen below are probably the best sclupted 15mm figures I’ve ever had the pleasure of painting.  I highly recommend them. A+!

The detail of the sculpts is astounding, including belt buckles, gaiter laces, and woodgrain on the axe handles and shields.  The heads are a bit meatier than I’d prefer, but the face sculpts more than make up for this. Unlike many detailed figures, these are not carrying around a waist full of pouches, bags, bedrolls, and other junk that is a pain to paint and would’ve been left at camp during battle anyway.  There are a lot more poses available than I saw at first glance: the same pose is often dressed in different combinations of furs and cloaks.

These figures worked well with washes.  I used a variety of natural tones on their clothes, and a wash of Devlan Mud tied them all together well.  The faces were shaded with Ogryn Flesh wash, and I painted highlights on the hair.

The Knight General is a command pack from Legio Heroica’s fine line of Feudal cavalry.  A better figure choice would have made these guys look a bit more knightly, with kettle helms or closed helms and probably some horse armor.  These are solid figures with nice horses, and the riders even fit on the horses properly.  The main downside is the quality of the face sculpting, though it’s mostly hidden. A-

This is the first army I’ve painted with substantial shield designs, and one of the last shields I painted was the general’s.  I decided this army would represent the Danish, in the era of Valdemar II “The Conqueror.”  The coat of arms he used is still part of the Danish coat of arms: three blue lions on a gold shield, with 9 red hearts.

The only other connection I attempted to make with Valdemar II is in the flag.  Denmark’s flag, Dannebrog, has its probably fictitious origin story under the reign of Valdemar II.  It is said that a red flag with a white cross dropped from the heavens and inspired the disheartened Danes to win the Battle of Lyndanisse in Estonia in 1219.  This flag is the approximate shape and proportion of Dannebrog as depicted in the 14th century Gelre Armorial, which is quite different than today’s Danish flag.

The two optional 3Bw elements are represented here as crossbowmen.  Crossbows were used more and more through this army’s time period, so we decided crossbowmen would be more appropriate than archers.  These figures are Khurasan Frankish crossbowmen.  We probably should’ve chosen some hairier guys, or maybe a few kettle helms. They’re very nice sculpts except for the faces, which are rather featureless.  A/A-

The remaining figures are the multitudes of blades, and one element of spearmen.  For these, we chose Khurasan’s Saxon Huscarls (with axes), German Milites (with swords), and Saxon Select Fyrd (with spears).  Most of the shields are kite/almond shaped, which is expected for an army this late, but we tossed in some round shields which would still be in limited use.

The only complaint I have about any of these sculpts is with the faces on the German Milites and Saxon Fyrd.  The clean shaven faces under nasal helms have almost no facial features. I admit they’re almost totally covered, and it’s only a minor problem, but the Huscarl faces are so much better that it’s a noticeable contrast.  A/A-

It was only as I was cleaning and assembling these figures that I realized a flaw in our figure selection: all of the figures except the spearmen were using two handed weapons with their sheilds on their backs.  Oops!  The upside is that during battle I get to see all my shield painting, instead of a bunch of Danish mail armor.

The other thing we could’ve chosen a bit better is the helmet selection.  There would be more kettle helms in use during this period, and a few more closed-face helms as well.  The figures we chose were purposefully limited to two mail order transactions, which is an unfortunate compromise to make, but I’m not sure my entertainment level would increase enough to warrant paying for shipping a third time.  I will look for some additional suitable figures at Cold Wars, however.

For the shield color and pattern selection, I used the same sources cite above, along with some other Internet research.  I found one interesting site intended for use by SCA participants attempting to register Viking heraldry even though it didn’t actually exist.  Along with speculation about how to fit Vikings into the rules, it has an interesting description of Scandinavian heraldry and a survey of the colors most commonly used.

Some of the shield patterns are directly from Osprey books, but most are simple divisions of the field in the common Scandinavian colors.  Unfortunately the sheild bosses don’t leave much room for symbols on the shields.  Apparently Scandinavian heraldry didn’t change as much over time as other heraldry, though, so I wouldn’t expect the complex patters that emerged in the rest of Europe.

As with everything, it’s all a matter of how picky you want to be and how much research you want to do.  I did as much research as I wanted to do, and came up with something “close enough” in my own mind.  I spent as much time painting them as I could while enjoying it.  Now it’s just time to learn how not to lose with them.

After seeing the hand made bike shelves available at Knife and Saw, Marla and I were inspired to find a better bike storage solution than a hook in the ceiling.  Unfortunately I ride enough that the convenience of storing the bike right inside the front door outweighs the ugly factor. 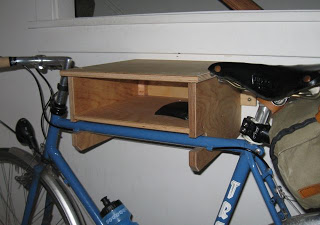 So, Dad and I designed and built this shelf.  Thanks for your help! It’s more pragmatic than pretty.  I like the shape and proportions better than the Knife and Saw shelf, but we used practical high quality plywood instead of pretty hardwood.  I’ll put a better finish on it once the weather is warm enough to do this outdoors.

In response to a recent question from a Fanaticus forum reader, here’s my take on the Terrainguy brown-green gaming mats.  I’ve included photographs from a few recent blog posts that show m brown-green mats in action.

These mats are available in a variety of colors and sizes.  I have a 4’x6′ mat and a 30″ DBA mat in brown-green, and I’m very happy with both of them.

This is the best looking flocked gaming mat I’ve seen so far, but I know of a few I haven’t seen in person.  The flocking material is not static grass, it’s more like the Woodland Scenics “fine turf,” made of very fine ground foam. The mat itself is made of canvas with a rubberized material on the surface that holds the flock in place.  Mine aren’t old enough or well-travelled enough to know how well the flock holds up to heavy use, but I haven’t had any problems so far.

For storage and travel, I roll the mat.  I would not recommend folding it, I would expect it to get permanent creases.  They’re flexible and roll easily.  They hold a slight curl when you unroll them, but they’re easy to flatten out.

Overall I’m happy with these for the price I paid, and I’d definitely buy another one if I need any more mats.  The larger mats often go on sale, but the DBA mats seem to always be full price.  The DBA mats are in a different section of the web site, making them harder to find in the color you want, but all of the colors are available for DBA sized mats as well as the larger mats.