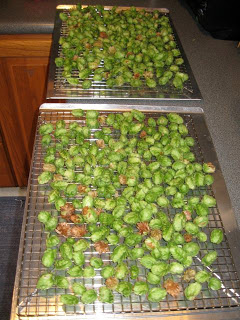 I picked my first batch of hops last week. I tried to get all the big ones and leave the small ones, but it’s a bit of a pain in the butt to be that picky.

After drying, I ended up with just under 2oz. of hops. That’s more than last year already, but I doubt I’m going to get this much again from the plant.

I expect if I want a lot more, I’ll probably have to put up a taller pole. I should probably also chop off some of the bines early on instead of trying to train them all, since “everyone” seems to suggest this is the best way to do it. 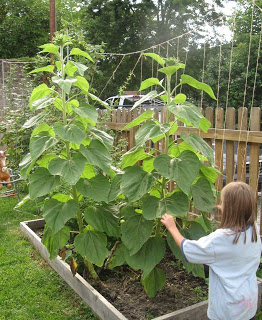 Martine’s birthday party last weekend ended up being a lot of fun for kids and adults alike. Between slaying the home made dragon piñata with a sword I turned, and cutting the castle cake, Martine posed next to the ample sunflowers for a few pictures.

Yes, they’re as big as they look: taller than me, anyway. They were volunteers, and they’re sort of taking up all the sun. The flowers aren’t all there yet, but they’re getting there. We’ve had a lot of rain this week so they’ll probably sprout up again.

Behind them, the hops are doing fine. They’re not ready for picking yet, but some of the flowers are pretty close. I won’t get the “average 1 lb” yield this year, but I wouldn’t use that many hops in a year anyway.

The sunflowers are also obscuring our tomato plants, among other things. Those are getting too big for their racks again. It’ll be gazpacho season soon.

After our recent storms, almost all of our garlic tops were broken off at the ground, so we picked them all today. We have some huge cloves, but most of the bulbs have exactly 4 cloves (less than we’re used to).

Now that we’ve picked them, what’s the best way to store them for planting next year?

For now they’re in paper bags halfway down the basement. 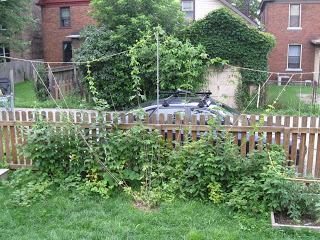 My hops are still going strong.

They’ve grown to the top of their lines,
and are starting to send out their horizontal runners. The two lines on the far left were a lawn mower casualty, but they weren’t growing very strong anyway. The strongest center bine, which broke off near the top, did start growing side runners soon after it was lopped off, and those continued up the line where the main bine stopped. The overall size of the plant is bigger than last year, but it still feels like it’s a bit crowded on this short trellis. 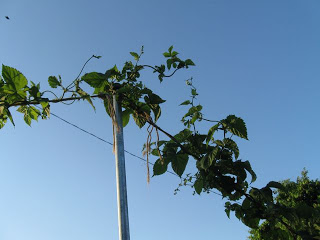 The hop cones themselves tend to grow on the side runners and not on the main bines. In this newer picture of the topmost section of the plant, you might be able to see several small hops “burrs,” which are the immature hop cones.

Regarding the twine used for training the hops up the trellis: I’m happy with the way it worked this year. The vertical strings make almost no difference once the hop plant gets to the top, because the hop bines themselves are much thicker and stronger than the twine. I used 3 pieces of twine across the top, with knots at 1′ intervals to keep them from untwisting. This has proven strong enough through our recent very large storms and winds (tornado on the South Side??) The gaspipe vertical poles have also worked fine.

We’ll see how much yield I get this year, but I’m considering a taller vertical pole for next year, because the “wide instead of high” theory doesn’t seem to be working as well as I had hoped. 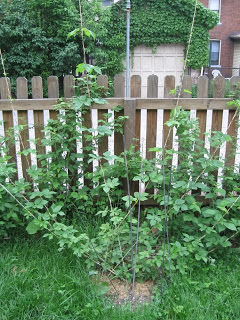 Hops like to grow up to 20 feet high or higher, ideally. Normal farm growing techniques recommend running 1-2 strings from each hops plant, with 1-3 bines running up each string.

Installing a pole 20-25′ high is a huge pain in the butt, and catastrophic failure is a lot worse than with shorter trellises, so I’ve decided to try the “width instead of height” strategy. My poles are about 9′ high, but I’ve strung up 8 vertical lines. I have about 10-11 bines trained up the twine.

Last year, I only got 2 sprouts, which is typical for the first year. It seems likely I’ll get a useful amount of hops this year.

Unfortunately, I accidentally broke off the top of the strongest bine, when training it a week or so ago, so that one’s not getting any taller. Last year, when I broke off a bine, two horizontal shoots grew out of it. This year, I doubt I’ll be that lucky. The plant is putting its strength into other bines already.

These are Ultra hops. I hadn’t used this variety before I planted it. It’s a newer hybrid variety, with relatively low alpha acids, but an aroma similar to Hallertauer. I chose it because it’s hardy and produces a high yield. Hopefully I’ll enjoy the way it tastes, as well.

With home grown hops, you don’t know what the alpha acid content is unless you pay to have it measured, or experiment over the course of multiple batches. This makes them less useful for use as bittering hops, but they’re still useful for finishing. 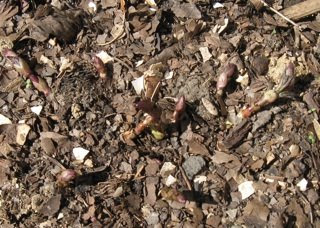 My hops bines sprouted. The first signs of hops this year came before I even planted the rhizome last year. At last count, 11 buds had sprouted, compared with a total of 2 for all of last year.

Luckily hops are resistant to frost. April Showers aren’t supposed to be frozen!