Some Point Park College students accosted us when we were at the annual Midwife Center’s Let Them Eat Cake! event. They didn’t tell us they had a camera until it was too late.

Here’s a translation for those of you who can’t understand what I’m saying.

They painted bike lane stripes down Forbes between Squirrel Hill and Braddock Ave.

If you had asked me previously, whether that section of road was wide enough for bike lanes, I’d have said no. But I have ridden down Forbes with the lanes full of traffic, and had plenty of room, so I guess I would’ve been wrong.

In any case, the bike lanes are 4-5′ wide on each side, and they leave plenty of room for cars in the car lanes. This is a road where bike lanes will make it safer for cyclists, but even a small shoulder would make this road safer for bicycles.

I happy to have the bike lanes, but even happier that the’ve repaved the potholes.

Update: Here’s an article in the Bike Pittsburgh forums about the new stripes.

Pittsburgh has added a few new short sections of bike lane on Wightman and Beacon in Squirrel Hill. These were no-brainers: the streets are wide, and it’s not clear whether there was one car lane or two. Now, there’s one car lane and one bike lane.

A rumor on the Facebook page of Scott Bricker (Executive Director of Bike Pittsburgh) suggests that the newly repaved section of Forbes Ave between Squirrel Hill and Braddock Ave will get some kind of bicycle-friendly marking as well. I was happy enough not to dive into a pothole every time I rode down Forbes, but sharrows or a bike lane would make it even better.

Bike lanes aren’t really enough to make a street safer. But they do help get more people cycling on the roads where they belong. More cyclists on the road make all cyclists safer, by teaching motorists to watch for cyclists whenever they’re driving. 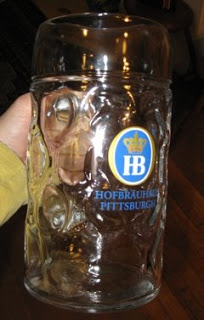 “It comes in litres? I’m getting one!”

For the last few days, they’ve been training. Those with a special invitation could go eat free food while tormenting the waitresses-in-training with special orders, though you still had to pay for beer.

Well, Daniel works in Southside Works proper, instead of just next to it, so they all got invitations at his company. He went for lunch on Friday, and they invited our family for lunch on Saturday.

It was a nice day, so I rode down with Martine on the trail-a-bike, and Marla and Ezra drove out to join us (I still need to work on that). We met Kristan, and then waited for Daniel and Levi to arrive via bus from their St. Patrick’s Day festivities. They let us in before Daniel arrived to facilitate things. It turns out the “Invitation” was really nothing more than instructions to ignore the huge “We aren’t open, we’re in training” sign.

The food is provided in huge portions and would be expensive if we were paying for it. They have a veritable plethora of meat products whose construction you wouldn’t want to observe, as well as a larger than expected selection of “not German, strictly speaking” food, including vegetarian options. It tasted fine, but my dish was easy: Caesar salad with blackened salmon. Marla had Alfredo and enjoyed it. I tasted the Tilapia, which was also just fine. I guess I’m not a very good food critic, but my tastes lean more towards non-european ethnic foods.

The building itself is as just as you’d expect: it’s the nicest looking giant faux German beer hall in town. It has huge ceilings, and the “long bench” table seating. They don’t seem to use the “meet your neighbors” dining style as it would be done in Germany, but we had a fairly large party in a fairly empty hall, so it didn’t really matter.

Finally, the beer! Well, it’s German beer, Hofbräu beer. It’s now brewed on premises, but they got a bit of a head start; I think they had Penn Brewery contract brewing before they opened. They had the Hefeweizen, Lager, and Dunkel when we were there, but in general they’re also supposed to have a Light and one seasonal beer. Dan and I had a liter of the Hefeweizen, and the wives ordered a sampler. I think I prefer the Hefeweizen out of the choices they had there, with the lager taking a surprise 2nd place. It’s not Belgian, but they give you a whole liter to make up for the lower alcohol content. It’s also only a bit over $7 for 1l, which is less than some 20-35cl servings of Belgian beer on tap at Sharp Edge.

Now that I’ve gone once, I won’t be disappointed to follow my original plan, which was to not go at all for a few months, while I let everyone else try out the New Popular Restaurant. Though, they have around 500 seats inside, and they’re supposed to have several hundred more outdoors (though those aren’t done yet), so I don’t expect they’ll be really crowded until Oktoberfest.

The bad news: last fall, Penn Brewery on the North Side had their rent raised, and declined to renew their lease. They’ve already contracted their brewing out to Lion brewery in Wilkes-Barre, and the restaurant’s last day open was Friday.

The good news: the owner and the landlord came to an 11th hour agreement on Friday, which renews the brewery’s rent for 5 years. Hopefully the restaurant employees haven’t all quit yet.

Work is ready to begin on an important section of the Great Allegheny Passage trail.

This section of trail will be in downtown Pittsburgh, and will pass through the current location of the Mon Wharf parking lot. It is intended to connect to the Smithfield Street bridge on one end, and Point State Park on the other. This will connect downtown and the north side trails to the south side trail, and Eliza Furnace trail (Jail Trail).

Although this section of trail won’t be very useful for me, it will encourage at least one of my coworkers to ride his bike to work.

I’ve been extremely happy with the Hot Metal Bridge pedestrian/bike span since it opened a year and a half ago. It has seen constant use year-round, and they’ve even started clearing snow from it.

Anything that gets more people using bicycles as transportation is a good thing, in my mind. More cyclists on the roads make the roads safer for all cyclists.