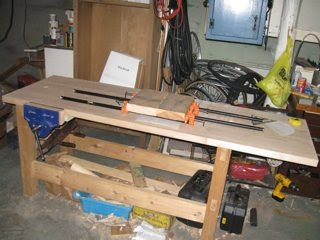 In case you haven’t figured it out yet, “Epic” refers to a project which went on far longer than it should have, and/or is not finished yet.

Around 1998, when we moved into our house, I started building a woodworking bench. I built the base in the tiny workshop in Marla’s mother’s house, using mortise and tenon joints on some dimensional 4×4′ lumber. I was inspired around this time, from attending Michael Dunbar’s Windsor Institute and building a Windsor chair in October 1998.

Some time after that, I bought some hard maple for the bench top; a few years later, I pieced the top together. Unfortunately, due to some miscalulation and/or overzealous jointing, I ended up with the top about an inch too narrow for the base. Around this time, I also received a very nice Record woodworking vise for Christmas, before Record went out of business. (Thanks, Dad!) I cleaned the glue joints and trimmed the ends, but with inspiration from the chair class waning, I didn’t make any further progress.

Since it was a vaguely horizontal surface, it was fine for most of my general handyman tasks, even though it was inadequate for woodworking. It served this purpose well for many years, while I worked on a variety of non-woodworking projects.

Then, in 2007, I attended another Windsor chair making class, this time taught by Brian Cunfer near Lancaster, PA. I built a side chair, including turning the legs (which we didn’t do at Dunbar’s class).

With my newfound inspiration, I decided to continue work on my bench so I could build a windsor style stool. I flattened the top, fit it to the base, and bought a lathe to turn some legs and stretchers. After turning the spindles, I started turning wooden boxes. But woodturning doesn’t require much of a bench, and certainly doesn’t require a vise. And the top was still too narrow for the base…

Soon the newly flattened bench top was covered with spindles, broken boxes, box blanks, and other various bits of turned wood. After giving away a few dozen wooden boxes for Christmas, woodworking and turning once again ceased to be my primary hobby.

When my parents decided to visit after Christmas in 2008, Dad asked “What projects do you have?” I added “finish the bench” to the top of the list.

When he was here, we made some great progress. He brought some hard maple to widen the top enough to fit the base. We widened the top, trimmed the ends, re-flattened the top, and added a spacer block to mount the vise. Finally, after a few bolts to hold the top down, and wooden vise jaws, it’s starting to really look like a bench.

It’s now finished enough to use for woodworking, so I can build the stool seat and assemble it. Thanks!

The remaining tasks include smoothing the top and ends a bit more, and applying a finish. I’ll wait for the warmer months before finishing it, so I can ventilate the basement while the finish dries.

Anyone who has seen many woodworking benches will probably notice that this bench is fairly sparse, and that the base and top are attached in a somewhat odd position. I’ll provide an explanation, but no excuses. There’s no way I could’ve made a substantially better bench, without any bench to work with. The odd proportions are purely due to a series of changed plans combined with no desire to redo any work already done.

On the bench, you can see I’ve started the stool seat. I’ll post more about that as it progresses.