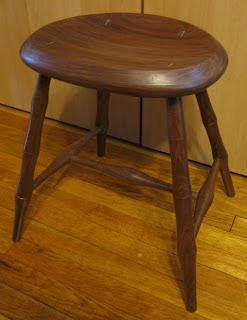 The walnut stool is finished! I’m very happy with how it turned out.

Using naturally finished woods is in Windsor chairs generally not done, for a few reasons: strength, and aesthetics. I think on a simple stool with fairly plain turnings and without spindles, the grain doesn’t make the piece too busy. This stool is entirely walnut, except for the seat wedges, which I made from Cherry for a bit of contrast. There was quite a bit of variety in color in the different pieces of walnut, so I tried to arrange them with similar pieces nearer to each other. Even the seat isn’t a large expanse of “just brown.” It has stripes of color ranging from orange and pink, to grey.

Again, I used Minwax wipe-on poly finish. For the legs and stretchers, I applied the finish on the lathe, which protects the legs from damage a bit during construction. In areas where the wood is rubbed, it’ll stay polished even if the finish wears off. Everywhere else, the wipe-on finish is just shiny enough.

I’m happy to say that my “catalog of mistakes” helped a lot. I didn’t break any parts, or have to remake anything, and did everything in a better order. I built a test joint to make sure I made the stretcher tenons the proper size for the holes. Now my future challenge will be improving my ability to cut the tenons the correct size, and smoothly.

I’ll include a few pictures I took of the process, but most of the time I don’t feel like stopping to take pictures. Unfortunately Marla is usually asleep when I work, so I can’t enlist her help much either. Most of this stool was constructed between 11pm and 1am on any particular weekday. 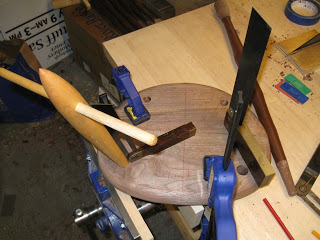 Here’s the setup used for reaming leg holes. The tapered reamer is in a leghole, and I’m checking the angles with a bevel and a square. My reamer doesn’t have a very long body section parallel to the axis of rotation, so I adjust my bevel angle by half the taper angle, and line up with the tapered part of the tool instead. To use the square, you move your head sideways so the square and sight line are in line. Then you check the top of the the reamer in relation to the square/sight line, and adjust it accordingly. 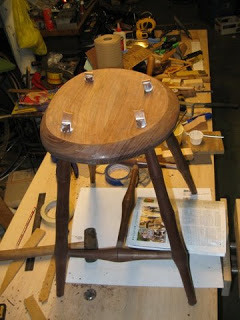 Here, I have glued up the undercarriage and glued it into the seat. This part of the process is a bit of a race against glue drying, so it’s hard to stop and take pictures. The standard construction order is to construct the H shaped stretchers first, aligned in one plane. Then add one leg, and make sure the stretchers are aligned properly. Add a second leg, and test with the seat. Then, add the last two legs, always making sure they’re aligned correctly. Finally, apply glue to the leg tapers and mortises, hammer them into the seat, and apply wedges (also glued). I happened to let the undercarriage dry between those steps.

If you think my bench looks messy in this picture, you should see it when I’m not in the middle of a project. It turns out that for building chairs, you really don’t need much actual working space on the bench. But having convenient tool storage would be a much better solution than just shoving stuff down the bench until things fall off the other end. 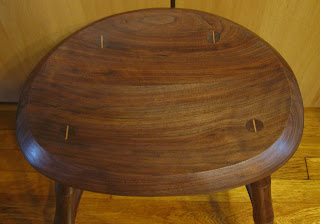 Here’s a closeup of the seat. You can see some of the interesting coloration here, but it’s better in person of course. I cut the walnut seat out of one thick piece, in a “book matched” arrangement. Unfortunately, the grain doesn’t match anymore since the seat is carved out, and book matching makes is a bit more difficult to carve the seat where the two planks meet. This was harder to carve than a pine seat; I don’t think I’ll be doing another hardwood seat.

I managed to mangle only one small section when trimming the legs, where I dug out too much wood near one leg. I’m also very happy with how well the scraper cuts across the end grain of the legs. With all the wood the same hardness, it doesn’t just cut the seat and skip across the leg. After scraping, I lightly sanded with 400 grit paper, and it was ready for finish. I probably didn’t need to go down to 400, but it did smooth out a bit of the raised grain after scraping. The seat still has a slightly wavy texture across the surface from the compass plane cuts, but it’s hard to notice.

I generally don’t sand the edges of the seat, I prefer to leave the facets from the spokeshave. Unfortunately, the end grain ends up slightly rough in some places. This isn’t too much of a problem under paint, but I did use some fine sandpaper to knock off the rough spots between coats of finish on this stool.

I’m very happy with how this stool turned out, and I might even still have enough momentum to build a perch. At that point I’ll be getting close to stool overload, though. If Marla loves the perch more than the stool, and I like it enough to work in front of a computer with it, I might make another one, but otherwise I’ll attempt to move on to another Actual Chair.