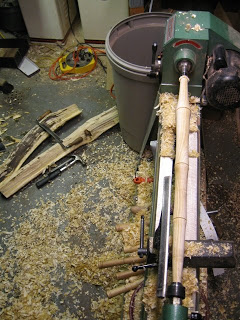 A woodworking update: I’ve completed a Perch using the plans Peter Galbert posted on his blog. I haven’t painted it yet, because I’m not sure I want another red stool.

Two of the legs and both stretchers were turned from the first batch of logs I found in the park. They started out looking like the firewood sitting on the floor in this image, and ended up looking like the leg on the lathe.

I turned this leg too soon after bringing the log in from the 20F weather outside: the wood was still frozen. I couldn’t get any clean cuts on it, so for the other two legs I just turned them round and let them warm up and dry a bit before finishing them. Although I planned to clean up the first leg later, it ended up way too warped to even consider this.

The third leg, this one’s replacement, I turned from some Hackberry dad left down here at Christmas time. When I first turned all the legs, I thought this might also be a hackberry log, but now I think it’s more likely Elm. I know these are not ideal leg woods, but they’ll be strong enough, and the details on bobbin legs are minimal and not easy to screw up, even with wood that doesn’t hold detail well.

More news on the Free Wood front: near Martine’s school, 3 or 4 trees toppled down on top of each other in the woods. One of them split and splintered on its way down. Someone was almost hit by another one, when they fell. I waited until they cut them into smaller pieces, and today we went and collected some. I have some long, straight, clear sections of I think Maple which will make some nice legs. I may have to bring a wedge and mallet and go back for more, this is really nice wood. I also got another cherry log because it was there, and some more of this open-grained greenish yellow colored wood I’m having such a hard time identifying properly. 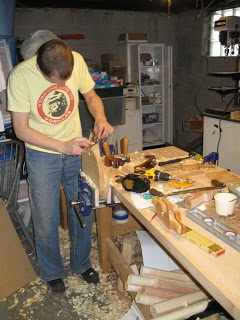 In this picture, you can see my increasing collection of spindles, under my bench. These are all from the logs I’ve collected, and hopefully they’ll eventually turn into legs, stretchers, or wooden boxes.

It’s quite fun to rough out spindles from the log, but it feels like a big waste to create so much waste wood in the form of chips. But then I remember the city’s wood crew trucks, which chip all of the logs as soon as they clean them up. Even if only a tiny fraction of the wood I collect ends up being used in a project, it’s still better than leaving it on the ground and letting it rot. The rest will go to my in-laws’ where they’ll use it for chicken bedding, or burning for maple syrup.

There are some really depressingly nice, huge, straight, 2′ diameter, 6′ long logs in the park that I just can’t think of any good way to retrieve. It pains me to see them sitting there, ready to start rotting at any moment. I could probably get back bows out of those logs, if I could get them out of the park.

Peter Galbert does a few things differently than I’ve done on previous chairs and stools, so I learned a bit on this Perch. First, he drills his holes from the top down. Since they’re angled, the hole enters and leaves the seat at a different place: you need to know whether to drill from the top down or bottom up, in order to get your legs in the right place. 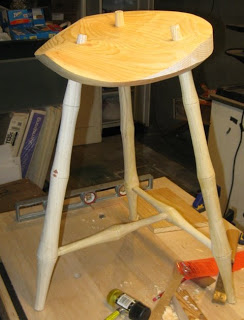 When I drilled from the bottom up on previous stools, I didn’t have problems with tearout: I just carved it away when I carved the seat. But this time, I left unsightly scars on the bottom, unfortunately. Let this be a lesson to me! I need to use a backing board or a better bit (see below).

Peter also leaves more of his seat uncarved than I am used to, before assembly. This was a very fun seat to carve, but I didn’t really enjoy the new, improved clamping challenges posed by finishing the seat after assembly. The shape of this seat is quite nice, and the lines flow well and make sense, once you actually do it. Again, Peter’s videos helped a lot in remembering the carving steps, and they’ll help for my next shield-shaped seat as well, I’m sure.

One detail worth noting on this image is the blood on the front leg: I cut myself while fondling one of my tools. It wasn’t even the cutting edge. But it wasn’t as bad as my previous cut, from sharpening my drawkife. Drawknives look dangerous and imposing, but most of the time you aren’t near the cutting edge. Except when you’re sharpening them. 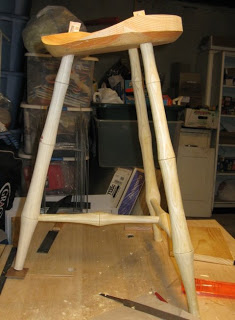 Speaking of better bits, I bought another 5/8″ spur point bit. What an amazing difference! My old bit took forever to cut, dulled itself cutting through even relatively soft wood, and burnished the holes. It was one of the highly rated bits from Highland Woodworking, and it sucked straight out of the box. I replaced it with a no-name bit I got locally at Rockler, and what a huge difference it made! I’ve only used it on the Perch’s undercarriage so far, but it’s already far better than the other bit ever was.

This time, I think I finally cut my wedges thin enough. I can never seem to sink them deeply enough into the legs.

In this picture you can see the bins of childrens’ clothes and other “stuff” that will be sold at the annual Pittsburgh Mothers’ Center Kids’ Stuff Sale. But it may be more interesting to note the angle of the seat: yes, it really does pitch you forward as much as it looks like it will; but this is a good thing.

The future is looking bright, with respect to me keeping enough momentum to complete an actual chair before slipping into a different hobby for a while. I guess I’ll have to start doing some drawing to figure out exactly what it is I want to make. 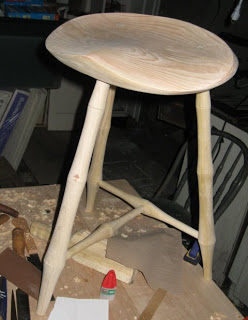 And now, finally, the image you’ve been waiting for: the finished perch. Marla’s initial sit upon it sounded promising, so we’ll see how that goes.

Seat carving is an area where I seem to be improving. I look at the chairs I made in classes, and they’re downright rough and lumpy compared to my more recent stools. This pine is a real pain with tearout, especially where the curves leave high and low spots on the grain. But this time, I managed to scrape the seat enough to move straight to 220 grit, so that’s good.

I used the superglue to stop some checks in the bottom of the seat: hopefully this will prevent them from getting much worse over time, but we’ll see. The grey chair in the background isn’t a “real” windsor, it’s a factory chair I got at a yard sale for $2.

That’s it for now, it’s late. Damn Daylight Stealing Time, I never can get used to the time change.