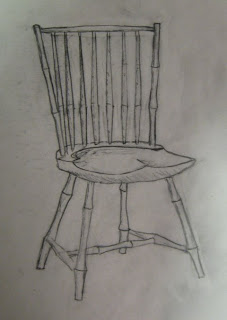 This is a sketch of the rodback chair. I made it before I started working on the chair using tracing paper over a photograph of the chair I was inspired by. I changed things where necessary to show the chair I planned to build.

Rod Back chairs are a later (1800-1820) “degenerate” style windsor. They typically have much straighter legs and less deeply carved seats than earlier styles and most of them used a square stretcher pattern instead of the “H” stretchers here.

I like the more comfortable deeply carved seats of earlier chairs, but I prefer the turnings used on later chairs. So, I paired the seat shape and leg angles of an earlier Comb Back chair with the turnings and square back of the rodback. Compared to the photograph I traced, this seat is carved more deeply, the swell in the spindles is higher, the posts are different, and the leg angles are different. 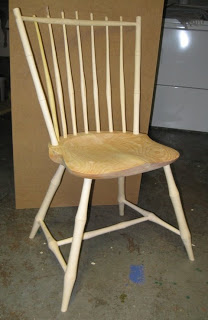 I took a photo of my chair-in-progress, from approximately the same angle as the photo I traced. It looks pretty close!

I like the much slimmer look of my chair, compared to the sketch. I think the angles are a bit exaggerated in my chair because I was very close to it when I took the picture.

Since the chair isn’t finished yet, I’ll take this opportunity to be critical. The front legs of the chair are splayed a bit more than the plan called for; I’ll have to see whether I built it incorrectly or planned it incorrectly. It may be only because the front of the seat is higher than the chair I planned from. That’s the main thing that looks a bit odd with it, when I look at one portion of the chair critically, instead of standing back and admiring it.

It’s quite comfortable, but I haven’t spent a lot of time sitting in it yet since I haven’t epoxied the seat back together yet. 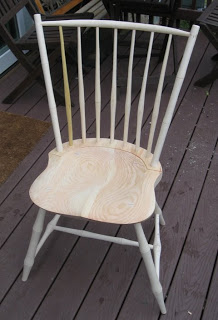 Today I trimmed the spindles. If it weren’t for the unfortunate crack, it would be basically ready for a quick sanding and a few coats of paint.

There are a few other things that didn’t work as well as I would have preferred, but worked out in the end. I didn’t orient the seat blanks properly. When carving the wood along the join, in some places I needed to carve in one direction on one side of the line and the opposite direction on the other side, which made things tricky. It’s easier to glue up seat blanks when both halves come from the same board.

I used wedged through tenons on the post-rod joint. This worked well enough, and it’ll be strong, but I had problems with drilling a through hole without breaking the grain out on the other side of the post. I think I need to replace my crappy 1/2″ bit, as I did with my 5/8″ bit. Although these bits from Highland Hardware got good reviews in Fine Woodworking, they’ve been horrible in my experience.

I’m also not completely happy with the wedged joints between the spindles and rod. They’re a bit loose. I may dab a bit of epoxy in, while I’m patching the cracked seat. In general, I need more practice carving spindles. That’s understandable, since I’ve been working on stools lately, and I’ve been using suboptimal spindle wood.

I’m in the home stretch now. I’ve been wondering whether I have enough stamina for another chair, but Marla tells me I can’t stop making chairs (or at least parts) until I’m done clearing the wood off the porch. I guess I’ll have to at least rough out a bunch of spindles, rods, and legs.