How does an adult carry two kids with one bike? I have several bikes, a rear kid seat, a trailer, and a trial-a-bike pedal trailer. The only combinations of kid carriers which will work together with one bike are the trail-a-bike with the trailer behind it, or the rear seat and the trailer.

With Martine on the trail-a-bike, I already use my lowest gear up some of the hills around here. I’m not sure I could handle dragging another 40+ pounds on two more wheels behind her. And I know she has no interest going back to riding in the trailer; she never enjoyed that even when it was her only choice.

The only other options I know of require a two-seater bike of some sort. With a tandem, any of the we have could hold a third passenger easily. Or, Marla and I could carry both the trail-a-bike and trailer behind us as a group of 4.

I’ve been researching this lately, since I don’t think I’ll enjoy staying home all summer whenever Marla takes the cat car. We found several solutions aimed specifically at the kid-adult tandem market.

The problem with these child-specific solutions is, not only are they expensive, but they’re only useful for children of an appropriate size. I expect they’d hold their resale value well if taken care of, but it would be better to get longer use out of them.

So I considered a full tandem, suitable for use by adults as well as children. One good option which doesn’t take up a lot of space, and adjusts easily for use both by children and adults is the Bike Friday Family Tandem. This is a small-wheeled folding bike, and the rear seat can adjust for use by very short and very tall riders.

The Bike Friday was my preferred solution, but then I came across another option on craigslist: a used Burley Duet tandem, with a kidback stoker kit. On a tandem, the front rider is the Captain, and the rear rider is the Stoker. A Child Stoker kid or “kidback” converts an adult-sized tandem for use by children otherwise too small to ride it. It adds another set of pedals which are within reach of the seat, but the child can’t put their feet on the ground. 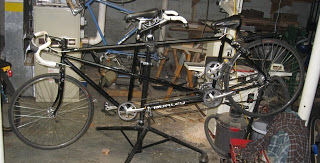 I bought the tandem. It’s a pain to get into the basement, and I haven’t tried getting it back out again yet; we’ll see how that goes. The main problem with it is the space it takes up, and moving it around when we aren’t riding it. It weighs about as much as Marla’s recumbent weighed, but it’s much more unweildy. It uses the same roof rack that we already had, for use with the recumbent.

The tandem doesn’t need a lot of work, but it does need some; and it wants some more. So I get to learn about tandems.

Most aspects of bike hacking and maintenance apply equally to tandems, with a few exceptions. First of all, there are a lot more chains and chainrings to take care of, and some of the chains are longer than a normal bike chain. Cables for rear brake and derailers must also be extra long in order to reach.

I want to reduce the stem length slightly, and increase the height. It turns out this tandem has a 1 1/8″ threaded headset, which is an uncommon enough size that I don’t have anything suitable sitting around. Both seat binder clamps were broken due to misuse; luckily they’re cheap and easy to replace. The front seat post was stuck in the tube, but again very luckily, I was able to loosen it with oil and brute force instead of having to resort to cutting tools.

At this point I basically need to wait for some pars in the mail before I can make much more progress.

An initial short ride tells me this handles very differently than an ordinary bike, or even a bike with a trail-a-bike: it’s going to take getting used to. Martine rode on it a bit, and I think she’s going to really enjoy it. But it’ll be a while before I try two kids at once.