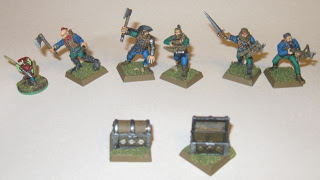 I decided to try painting some miniatures again, to see if it would capture my attention as my next “thing to do,” or not. The verdict is still out, but I did finish this batch of figures at least.

Here we have: one goblin, two treasure chests, and five Middenheimer warriors armed with axes, swords, and crossbows.

I never manage to take good pictures of my figures, most likely because I can’t produce enough light.

I did an adequate job painting these, but not a wonderful job. They’re fine for table gaming, which is all they’ll ever see (if they’re lucky). I haven’t painted anything in several years, at least since Ezra was born, and these figures I’ve had sitting in a box for probably 5 years or more, waiting to be assembled.

I have no clue where the goblin came from. It’s a random metal casting I picked up somewhere, not a Games Workshop piece. I started painting it last time I was painting, and decided to finish it while I was working on the rest, so it’s really out of place here.

The rest of the pieces are plastic models from the Games Workshop game Mordheim. I like the “mix and match” and posing you can do with these multi-part plastic models. In Mordheim terms, these are human mercenaries from Middenheim, but I tried to make them passable as pirates as well. I chose a civilized blue and green color scheme: maybe they pirated a shipment of fine French high school band uniforms?

There’s an equal likelihood that we’d play Blood and Swash with these. Martine’s just getting old enough for this, so maybe my secret plans to create a new opponent will finally reach fruition? She can handle the rules, but probably won’t like it when her guys start dying. Last time I tried playing with Martine, she convinced me the guys were going to start talking to each other instead of fighting. We’re going to have to work on her social skills. *

Blood and Swash is always really fun at conventions. It’s a simple, fast-paced skirmish scale miniatures game, originally designed for recreating barroom brawls in the age of Pirates. We played most recently on a regular Saturday game night, using some of Martine’s Playmobil soldiers and terrain (after she was in bed: she didn’t mind them dying when she wasn’t around). It worked really well: when Andy and Theresa’s guys died they took over a snake and a T-Rex, and chased Frank and I until we fled with the loot.

Blood and Swash has the fast gameplay of a miniatures wargame without any of the rules lawyering, combined with the open-ended nature of a role-playing game without any of the role playing (or rules lawyering); but the rules can be explained in 5 minutes and played by anyone who can count to 20. So it makes a great introduction to miniatures wargaming, but it can also be great fun as a light hearted wargame where how you kill someone is at least as important as whether you succeed or not.

It also doesn’t require many figures per player, to get started. However, I could probably use a few more just in case…

* Just kidding. Remember that post where I mentioned I like to say obviously false things for ironic effect? Besides, I think she has become much more caustic since last time we played.