I painted up a few extra elements to augment my existing DBA/HotT armies.

First is two elements of Greek cavalry. This is intended for use with my later Spartan DBA army. It turns out I may have needed some allied cavalry instead of greeks, to be strictly correct; and I really only need one of these. But they’ll help me fake a non-Spartan later greek hoplite army. 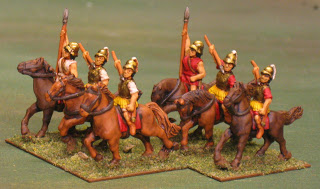 These are 15mm Essex figures. I got one pack of medium cavalry and a few packs of light horse, so there is one unarmored cavalry figure per element. The rest of the light horse figures would eventually let me paint up 3 2LH elements.

The other recent additions are 10mm Dwarven cannons. These are Citadel Warmaster figures, based as Hordes of the Things artillery elements. 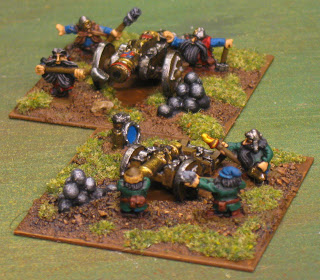 I based these up years ago when I painted the rest of the Dwarf army, but only got around to painting them now. I think I still have a few elements of blades to paint, but that’s not on the schedule yet.

I’m making some progress on my Later Achaemenid Persian DBA army, but not enough to take pictures of yet.