Family Game Night at Martine’s school was postponed due to weather, so we didn’t play the Jumonville game until last night. It went as well as I expected: successful, but very hectic with a group of 1st-4th graders.

The format of game night was basically a free-for-all: anyone could bring games and play with opponents they found, or borrow games from the school. My game was an oddball. I set it up and waited for people to walk up and decide to play. Lots of kids and a few parents and teachers were interested in the game before it started, and a handful of kids stayed to play. 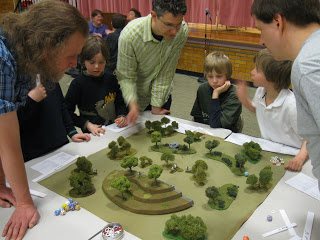 When I started handing out figures and explaining the rules, there were 6 kids from 1st through 4th grades, Daniel, and me. I decided on 8 players worth of soldiers with the idea that Daniel and I could step out if anyone else wanted to join in.

People came and left a lot between the instructions and the first few turns. We ended up with 4 kids and three adults who pretty much stayed for the whole game, and a few kids who came and left.

The game itself went relatively well. It took maybe an hour and fifteen minutes including instructions. The French started at the base of the cliff, and the Virginians and Indians were at least a foot away. Early on, the battle was relatively even. Then the French got a long run of turns in a row, and did some real damage. We played until the bitter end: the last Indian soldier, dubbed “sniper,” took out 2-3 French before finally being shot for his last hit point

I learned a lot about running games for kids. First of all, most kids of this age don’t want to listen to instructions at all. I’m not sure whether it was a good idea to remove Blood and Swash’s “roll for your soldier’s ability scores” process or not. On one hand, it was some setup time that was avoided. On the other hand, it would’ve gotten the kids to do something while learning about their soldiers’ abilities, instead of just listening to me talk.

I think it might work best to set things up ahead of time, and introduce the rules by playing the first turn. Describing the rules to players who are just going to leave is a waste, and you’ll have to re-explain for people who walk up anyway.

I got a hint of another problem when playtesting with Martine, but it was more obvious with a group of kids. Kids have short arms, and they’re short. It’s not easy for them to reach figures in the middle of the table, especially without dragging their arms over all the terrain. The Blood and Swash games they play with kids at conventions did a great job solving this problem I didn’t know I’d have: the games are in a very small (1-2′ square) model bar room, with outside walls. The outer walls require kids to lift their arms high enough not to hit any of the contents of the game board. A ship’s deck model with railings on the sides might also work well for this.

The useful attention span of these kids was also only about an hour. Things can’t go on longer than that without losing steam.

As for the rules themselves: we ended up making some mistakes, though the players were mostly insulated from this. In an earlier playtest, I could never remember to tell players to activate 2 soldiers on face cards, so I didn’t even try to implement this rule last night.

The other big rules mistake I made was allowing charging into close combat without any bravery tests. I forgot this the first time someone charged, and so I skipped it completely from then on. It didn’t really make the game worse, but it was simpler and different: we had a lot more close combat than in playtesting. One tactic the “free charge” ended up allowing was leaving close combat to charge a different soldier in order to get the charge bonus for fighting. I didn’t have a rule that said you can’t leave combat, because most of the time it would not be beneficial to do that anyway… as long as you have to make a bravery test to charge again.

I had enough d20’s for all the players to use, and I said players could keep them if they stayed for the whole game. Obviously for most of the players who left in the middle, this wasn’t enough motivation. But I think there was one player who was staying on in the end only to get the free stuff. It’s probably worth doing this again, but I won’t have any expectation that it’s going to keep everyone playing forever.

I didn’t have any figure casualties, not even a bent musket. 3 of my trees broke off, but I mostly expected that; I’m surprised they didn’t break off earlier when adults were playing.

Overall I’m quite happy with how it went, and I’m really glad Daniel was there to help me herd the cats. Thanks! In the end, it was probably just an excuse to paint figures and terrain that seemed interesting, but we had at least 2-3 games worth of “playtesting” as well as one “real” game so that’s worth it. I’m not likely to try anything with more complicated rules at an open game night, at least until some of the players really show they’re interested in learning more.