Today, I went to Cambridge OH to play in a pyramid format DBA tournament at Battle at the Crossroads.  It was a great day, and I did at least as well as I anticipated.

Battle at the Crossroads is a small annual miniature gaming convention.  There were about 5-6 scheduled games in addition to the DBA tournament, as well as a flea market.  I’m glad I really enjoyed playing DBA, because the rest of the games weren’t very interesting to me.  I managed to escape the flea market without taking anything home either.

I really enjoyed the Pyramid Format. We had 12 players, so in the first round we played 6 1-on-1 games.  For the second round, the winner and loser of each game join their remaining forces, with the winner playing commander-in-chief to the army as a whole; we had 3 2-on-2 games.  For the third game, they split one player off of each group of four to form a fourth group of three, and we played 2 3-on-3 games.  Placement was measured by your win-loss record, with your individual elements killed and losses counted to break ties.

The tournament’s theme was “A Day Under Scythian Skies,” and the eligible armies were Skythians (I/43ab) and all of her historical enemies.  Special rules for the tournament allowed Skythian players to start with an additional element, and to reduce their aggression from 4 to 0 or 1, which allows them a better chance to choose the game’s terrain.  I chose Skythians, since this would be my best chance to field this army competitively. My army was: 3Cv (gen), 8x2LH, 2x3Ax, 2x2Ps.

I didn’t get a picture of my first game.  In this match, I faced Jim K and his Later Achaemenid Persians (II/7: LCh(gen), 2x3Cv, 2x2LH, 1xSCh, 3x4Sp, 1x3Ax, 2x2Ps).  I rolled low for terrain and set up a hill and two small areas of rough.  I set up first with my infantry split onto both flanks, with the intention of swapping two infantry to the other side in reaction to his deployment.  My biggest mistake was failing to do this, but instead swapping my Cv general out from in front of his SCh.  As a result, my infantry reduced the maneuverability of my light horse, and basically pinned them in place.  My other big mistake was rolling lousy for pips every turn… but what can you do?

In the end I killed one of his elements, and he killed 2 of my light horse as well as my general.  This 4 element overall loss ended up being a good outcome as we entered round 2: some groups lost as many as 9 elements in the first round. 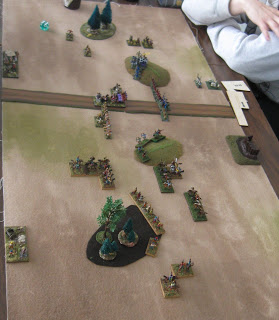 In round 2, Jim K and I (on the left, in the first image) played against Rich Baier with Warring States Chinese (II/4e: HCh(gen), HCh, 3Cv, 3Bd, 4x4Sp, 3x3Cb, 2Ps before first round losses) and Ted Hall’s Skythians (I/43a: 3Cv (gen), 9x2LH, 3Ax, 2x2Ps before first round losses).  Ted and I were relative beginners, so we faced off on my right flank while Jim and Rich fought over the other flank.

I deployed well, with some advice from Jim.  I placed 2x2LH far off to the right of the woods, my light infantry in column facing the woods, and the rest of my light horse and cavalry closer to the center.

My primary goal was to take the bad going with my infantry and threaten Ted’s opposing light horse. Rolling 6 pips on my first turn allowed me to achieve it quickly.

Ted responded by sending 2 light horse around my flank, and our groups of light horse faced off.  The bottom of this picture shows the result of this initial combat on my right flank, which pretty much decided the game: my light horse killed his, and then I turned his flank.  Although my initial rolls were lucky, I had my psiloi in reserve to help if I didn’t hurt him in the initial rush.

I ended up killing 5 of Ted’s light horse, breaking his command, and ending the game (since he was commander in chief).  He killed one of my light horse, which seemed lieke a good trade to me!  Jim and Rich may have traded an element each, but there were no decisive reuslts on our left flank.

I was split from that group to join Kevin Serafini (Kushan, II/46b) and John Loy (I/43a: commander in chief) in the third round.  Since John also played Skythians, we split our armies into separate mounted (John’s) and infantry (mine) commands. By now I’ve started to lose everyone’s names and army selections, but I know we were facing Larry Chaban (I/43a), Nick (II/24: 1x3Kn, 11x3Cv), and Tim (I/43a). 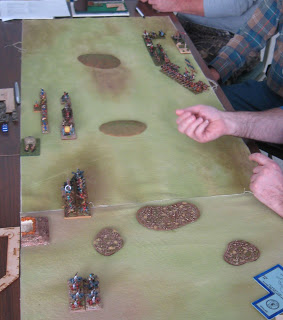 We got the terrain roll and set up first.  John placed all the bad going (rough) at one end of the board, and deployed the two mounted commands first with the plan of deploying my infantry after the enemy deployment, to take the bad going. As seen in the picture at the right, they deployed all their forces at the opposite end of the board, and I deployed my infantry in a reserve position behind Kevin’s forces to compensate for this flaw in our plan.

This deployment was almost immediately revealed to be a big mistake, as the enemy’s plan became clear.  Since they had fewer elements than we did, they didn’t want to fight on a wide front on this 72″ board, and risk being outflanked.  Instead, they denied our right flank and turned the table on us: they wheeled their entire line 90 degrees, and forced us to play across the narrow width of the table instead. 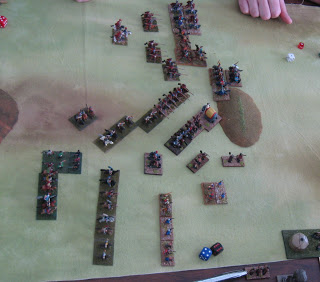 Luckily John and Kevin were able to get their faster mounted troops into a better position quickly, but I was left with few pips to move out from behind Kevin and protect our left flank from the impending charge of the light horse.

We did a fairly good job of salvaging the poor deployment, and in the end it came down to a close decision between which of our c-in-c commands would demoralize first.  We lost, but it was a very fun and tight game.  It made me consider the value of playing larger DBA games on a deeper board as well as a wider one.

I managed to do an adequate job of protecting the flank with a loss of 2 out of 7 elements, but I don’t think I took any kills in return.  If I had deployed facing my flank to start with, I think the biggest effect would’ve been to allow the other commands to take higher pip dice for maneuvering without endangering their flank.

After this game, we hung out for an hour or so for Rich’s game to finish, and awards were handed out.  Because he lost in the first round, Larry’s 2-year winning streak was broken, and Rich ended up in last place with no wins.  There were enough token prizes to go around: I got a nice little tower shaped “barker marker” (40mm square measuring piece).

I am very happy with my experiences at my first DBA tournament, and I’d definitely do it again.  I enjoyed playing Skythians, and I was happily not faced with any fiddly rules issues or armies I was unexperienced playing against.  It’s beginning to seem that I understand the rules of this game, but there are very few tactical problems I know the answer to yet.  I probably won’t take Skythians to an open tourney any time soon, but I’d consider them for a book I or themed event (especially since they’re currently my only book I army).

Regarding the special tournament rules for Skythians: I read some concern about the additional element in the army and the reduced aggression, from mailing list posts before the tournament.  However, I heard no complaints about it at the tournament itself, and I don’t think it was as overpowering as some worried it might be.

I figured there was nothing I could do with 9 light horse that I couldn’t do just as well with 8, so I chose an additional 3Ax instead.  I held that element until the last game, and it helped me retain bad going.  I’m glad I had it, but I consider it a slight change in army composition more than an additional element: I never had more than 10 elements after the first game anyway.  Since all the first round players were matched skythian vs. enemy, any relative diference in element count was balanced by the second round (though truthfully I don’t think there was much of a difference anyway).

My lower aggression allowed me to win the terrain roll the first game, but that didn’t help me win the game.  After that, since I wasn’t c-in-c, my aggression didn’t matter anymore anyway.

Unfortunately I don’t expect to make it to Cold Wars, but I do hope to be at Stooge Con and Historicon for more DBA tournaments.

Thanks to all my allies and opponents for the wonderful games; to Kevin for a ride to and from the venue; and especially to the organizers of this fine event!  It was a wonderful day of gaming.