Wyrd Miniatures makes some very nice miniatures.  They also make some really creepy ones, if that fits your tastes. 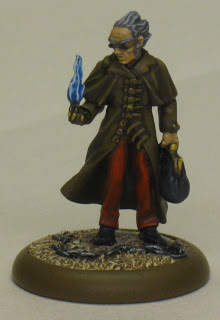 Personally, I really enjoy the steam punk elements available in their line.  After perusing their miniatures for quite some time, I settled on purchasing Ramos the Steampunk Sorceror and his crew.  He builds robot spiders out of scrap, and sends them off to do his dirty work.

I started by painting the arachnids.  Assembling these figures was a big pain in the butt, and there was almost no gluing surface at all.  They were definitely designed as display figures and not gaming figures.

The spiders are painted black with metallic dry brushing.  Except for a few lights and lenses they’re very straightforward.  In real life they have a nice monochrom metallic look that doesn’t come across well in images, and they have just enough color to be interesting. 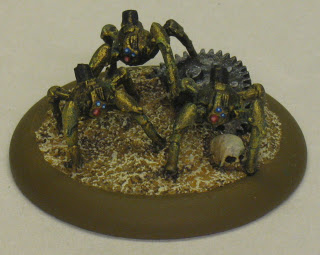 Three arachnids on a single base are a Swarm. 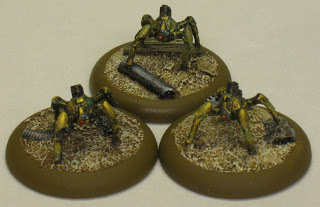 They can break up into individually based spiders for more flexibility. They can explode!  And Ramos can summon new ones when the old ones die.  We’ll see if any of this is worth doing, once we actually play the game. 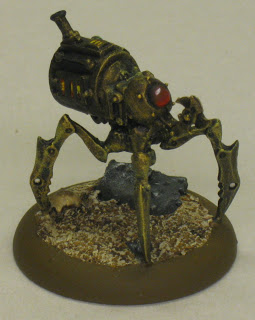 The larger Brass Arachnid is Ramos’ totem: basically a magical familiar, but his is appropriately a spider.  This guy is quite large for his 30mm base.  I like the model a lot, though the paint job looks better in person as usual.

All the bases are from Dragon Forge’s Wastelands II series.  I intend to find some long grass to tune the bases, but can’t seem to get it locally. 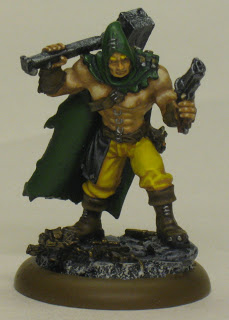 I chose Johann, a mercenary, for my other main dude.  Although he’s usually part of a different crew, his special ability allows me to take him with Ramos as if he were also an Arcanist.

I painted Ramos (above) and Johann using a blending technique for basically everything except the metallic portions and the base.  I’m very happy with how they turned out, especially considering how long it’s been since I’ve tried to do a good job on a 28mm+ figure, and also considering the amount of time I spent on them.

These figures are just enough to play a 25 point game, which is kind of small.  I’ll provide some feedback on the rules once we try it out, but I’m very hopeful.