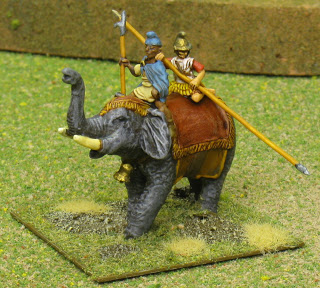 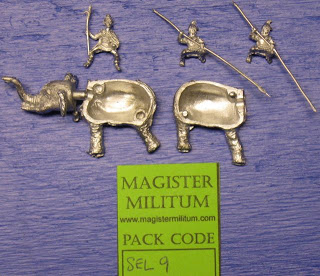 Here is a 15mm elephant sold by Magister Militum and sculpted by Chariot Miniatures, SEL9 or SEL009: “Elephant: Driver and Pikeman Astride.”  Judging by the pictures on the Magister Militum site, this elephant is available with alternate head sculpts.

The elephant is smaller than Essex elephants, and has a much more dynamic pose. It’s in scale with its crew, which are also smaller and slimmer than Essex 15mm people.  It’s appropriate for use in Alexandrian and early successor armies.

The elephant came with two pikemen, but I only used one.  There’s no reasonable way to put two pikemen on this beast except back to back, and they don’t fit well that way.

I really like the way this elephant assembles.  It doesn’t have any base, which is fine since elephant feet are so large.  The two halves of the body and the head all have pins to hold things together while the epoxy dries.  This works much better than the Essex assembly technique.

The pikes are much longer, thinner, and more flexible than Essex pikes.  I don’t expect it to last very long, and it’ll probably be hard to drill out and replace with wire.