… in which Alexander learns the value of a good road.

I made plans and predictions about how this game would go in my last post; how accurate was I?  Well, my summary prediction was wrong… but at least Darius III didn’t flee off the table. We played the game on a 5’x2′ board using NASAMW standard rules, since this seems to be standard these days.

Unfortunately I didn’t take a picture of the deployment, I only have an image after the first turn, so use your imagination.

The Persians deployed their high PIP command first, in the center of his right flank: 9x3Cv/LCh (gen), 3x2LH, 3x4Sp, 1x2Ps.  The low PIP command was next: 6x4Sp, 4x2Ps on the center of the left flank.  I wasn’t expecting a board as devoid of terrain as this, and it threw me off: there was nowhere I could funnel his troops to face my narrow pikes.  He deployed his commands with gaps on all sides, which would allow his third command to be placed anywhere: either in the center or on either extreme flank, giving him lots of options.

The only place I could use terrain to my advantage was the one big wood on my right flank, so I decided to deploy my Mountain Indian allies there.  I placed the command in columns: 5x3Ax on the road, 4x2Ps parallel to the road, and 3x2LH outside the wood.

My command structure was as I planned yesterday: 4x4Pk, 3x3Kn, 2xEl, 2x2LH in the high PIP command; 8x4Pk, 2x2Ps, 2x4Ax in the low PIP command.  But where should I put them?  It seemed clear that I should scrunch into my right side of the board so I could protect my camp, but which command should face his mounted wing and which should face his spears?

I can’t win against his cavarly with my pikes, and his light horse would quick kill my pikes or flank them easily.  So I placed my mounted command facing his cavalry, and deployed my pikes facing his spears.

No, wait.  I changed my mind.  The pikes face his cavalry and my mounted face his spears.  Done.  As the game progressed, I concluded this was the better choice, as it fit my commands’ missions better.  I shouldn’t try to deny a flank with troops I also intend to win with.  The pikes wouldn’t kill his cavalry quickly, but they also wouldn’t lose quickly; this would give my right flank time to start winning.

A problem I had in planning was that I never formally decided what my commands’ missions would be.  This would have been easy and obvious: the mounted command is there to win in the open; the Mountain Indians were there to win in bad going or flank and enter his backfield; the pikes were there to hold the line and “not lose” while everyone else won.  If I had noted this explicitly, the proper deployment would have been more obvious.

JM’s third command deployment was a surprise: he left space in front of his spear line to place his Auxilia.  Now my elephants were facing Auxilia instead of spears: not ideal.

On the first turn, my Indians got 6 PIPs and plowed through the woods: my psiloi took their first turn multiple move, and the Auxilia took the road.  Wow, roads can be really useful!  This is the best use I’ve ever had for a road.  My mounted command advanced steadily while my pikes wheeled in two psiloi-separated blocks to face the flanking threat from the Persian mounted wing. 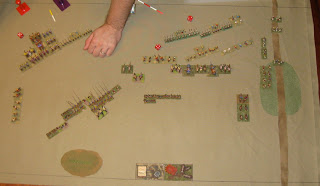 This set the stage for the next few turns.  On my right flank, my Indians formed up on the flank of his double line, as my mounted advanced towards him.   On the left, I deployed my pikes into a line and got my auxilia out to protect the extreme left flank from an impending light horse maneuver.

Unfortunately, I forgot that Pike don’t get a rank bonus against cavalry.   But, I also forgot they were +4 against mounted, so in the end I managed to live (since +3 can’t double +4).

JM wheeled his light infantry against my elephants and knights, and threatened their flank somewhat with his light horse. I was able to maneuver my light horse into place to face his, but I refused to attack his Auxilia line.  Instead, I advanced the Indians against his flank, since I knew that would have a great chance of success.

On my right flank, I ended up having my high PIP and allied commands combining forces against his single mid-PIP command, while his low PIP command stagnated behind the lines.  That gave me a big edge on that side of the board.  In the mean time, his “must win” flank was still a few turns away from contact. 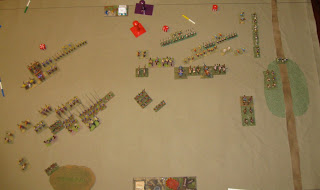 In the middle of the game I held onto my initiative on my right flank, and JM proceeded against my left flank.  JM’s mid-pip command was the first to be demoralized, after I destroyed a few of his light horse and light infantry.  We eventually realized he never assigned a general for that command, but many of his elements never saw combat anyway so it might not have mattered.

On my left, I was very nearly undone by his light horse flanking maneuver, but my auxilia managed to pull their ass out of the fire for a few turns until I could maneuver into a better position.  Unfortunately for JM, he let his high PIP command’s spear block fall behind, as I was hoping would happen.  He needed to rush his cavalry into contact in order to have a hope of winning there quickly enough, but this also left him with too few troops in combat and the rest left behind.  At that point he had to spend so many PIPs redressing his lines that he couldn’t advance his spears. 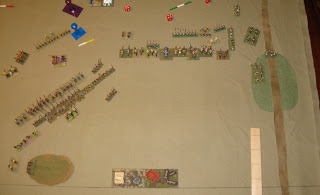 Once enough of his light foot command died or fled out of the way, I could finally start facing his spears on my right flank.  I had already killed some supporting Psiloi, and after facing off with my knights and elephants, he lost a spear with psiloi support and that command was demoralized as well.  At this point it was only a matter of time; but I still feared for my left flank.  In retrospect I shouldn’t have worried: I could win even after losing that entire command.

In the end, JM lost 18 elements as two of his commands were demoralized and fleeing off the board.  I lost 3 elements: two Mountain Indians and one from my pike command (or was it the other way around?).  This was a total sweep, but definitely not in the direction I expected.

Although my plans were not well defined, were very direct instead of subtle, and were primarily a reaction to JM’s deployment, they ended up working.  Some of this was luck: early on, I got the PIPs I needed to push out of the woods on my right flank, and I won several crucial combats that could have turned the tables if I had lost.

On the other hand, my deployment and maneuvering supported my plan.  I never felt like I was in a hurry on my right flank: I had the time I needed to turn his flank instead of walking into his angled line and splitting my elephants up, and I was confident that flanking would be the better maneuver.

I enjoyed seeing how the “grand battle” unfolded in this game, as it usually does in BBDBA.  I liked this army composition a lot more than I expected.  I’ve been sick of playing with or against Alexander in normal DBA lately, and I previously considered the Mountain Indian ally to be a compromise based on what I had on hand instead of a useful complement to fill Alexander’s deficiencies.

Thanks for a great game, JM!  I’m sorry you lost, but someone had to do it.  But since you lost, you probably learned more than I did, so I expect you to start beating me soon.