Frank and I played a 25 stone game of Malifaux on Saturday. We had a surprisingly balanced outcome compared to most past games, and we played through 5 turns before the end.

I chose my Perdita crew, set up straight out of the box: Perdita, Santiago, Francesco, Nino, and Papa Loco. Frank didn’t actually have any samurai, he chose his Viktoria crew: 2 Viktorias, 3 Ronin, and Misaki. I had the advantage in ranged combat, but Frank’s crew had high mobility and great melee.

Andy was around to watch and learn, so he set up terrain. We flipped on the extended encounter chart and wound up with a Shared Deliver a Message strategy: both of us had to take a (2) interact action within 2″ of the enemy Master, to deliver a message and gain victory points. This ended up having a large effect on the way we played, which means that as a game strategy, “it worked.” 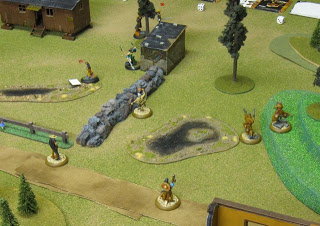 We announced all our schemes.  I chose to Bodyguard Perdita, and to Kill the Protege: Misaki.  I chose Bodyguard since Deliver a Message required Frank to keep Perdita alive; but in retrospect it wasn’t the best choice, as it gave Frank more incentive to kill Perdita as a contingency plan.  Frank chose Steal Relic, which also required him to take an action near Perdita, and Gather Soulstones: end the game with more stones than me.  He started with only 3 stones and I had 2; but he had the option of sacrificing Ronin to get more stones.

For the first few turns, I did the most important thing possible: get Papa Loco as far away from me as possible, and close to Frank; so when he dies, the explosion doesn’t hurt me.  We got surprisingly close to each other on the first turn, and had a bit of a shootout.  Papa didn’t survive, I’m sorry to say, and his final explosion had no effect.  One of Frank’s Ronin died soon after: Perdita shot her for failing to Obey her orders to run down Misaki. 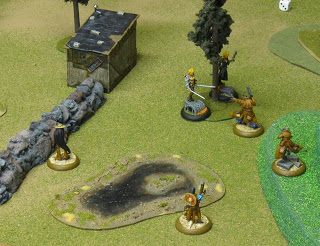 In the mean time, the Viktorias were approaching Nino and Santiago around a building, while Misaki hid behind it.   The two remaining Ronin were on the other flank, seemingly out of the action for now.  The Viktorias hit Santiago in melee, and in response he took 2 actions to Deliver the Message.  Since I completed the scheme first, I got 3VP.

At this point, Santiago survived long odds for longer than I expected. All my remaining guys emptied their guns at the Viktorias in rapid succession, in one huge Companion activation for the whole crew.  Since I was shooting into combat, all of the shots required me to randomly determine which model was the target, but Santiago avoided all but one of the attacks.  Unfortunately, the only luck I had was used up missing Santiago; I also did almost no damage to the Viktorias.

On their turn, Viktoria (no, the other one) killed Santiago, and Frank’s remaining Ronin closed in on Perdita, locking her in combat.  He Delivered the Message for only 1 VP, and then Stole my Relic (so we thought) and started running away.  I killed Misaki.  By now we were both out of soulstones, and the score was at 7VP for me (completing the strategy and both schemes) and 4 for Frank.

But the game wasn’t over yet.  Frank killed Perdita, knocking me down to 5VP.  For him to win, he needed to keep one Ronin alive (giving him 2 of his current 5VP) and sacrifice the other to gain soulstones (for another 2VP).  For me to win, I needed to kill either of his Ronin.

In the final turn (turn 5), my shooting was ineffective but Frank’s was not.  He got initiative, allowing him to get one Ronin out of the way. I wasn’t able to kill the other because it was Hard to Kill, and Frank cleaned out all of my remaining crew with the Viktorias.

So in the end, it seemed like Frank won with 6 VP, and I had 5VP.  But wait! He realized he was supposed to make a Willpower duel in order to steal my relic, but we forgot to do it. The result is unclear; but I think with the cards I had, I wouldn’t have been able to beat him.

I made some mistakes: I spent too much time shooting with Perdita to remember to keep her out of harm’s way.  I expected more from my guns based on their past performance, and Perdita was frustrated that no one would Obey her.

The strategies and schemes definitely affected gameplay and our play motivations.  I put Perdita into danger, counting on Frank not to harm her until he got his strategy and scheme VP’s… unfortunately I wasn’t able to get her out of trouble quickly enough once that happened.  In the end, I could’ve won the game with all my models lost, if I had only killed one more model.  I still really like the Malifaux encounter system, and we haven’t repeated any strategies yet.

I like this crew, especially how different it is from Ramos. I also the opportunity to demonstrate that it was in fact possible to beat them; maybe now I’ll hear fewer complaints about how broken they are.