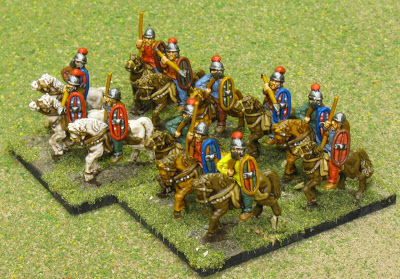 I wanted to play in the Two Davids campaign at Fall-In, and this time the theme is Gallic Wars. Almost all of the armies are Gauls, with a few Romans to kick around and maybe a few others who aren’t even as civilized as the Gauls.  I had most of a Gallic army in the form of Carthaginian allies; I just needed some cavalry to round out the list.

In this campaign, I chose the Remi.  These guys are allowed more cavalry and less warband, so I painted 4 elements (the maximum).  None of the cavalry are allowed to be chariots.

These are Black Hat miniatures that I added to one of JM’s orders.  I really don’t like the rest of my Gallic figures, they’re very “old school.”  These are also fairly old school sculpts, and they aren’t my favorite figures, but I’m happy with how they came out considering how much effort I put into them.  I painted them as quickly as possible, by blocking out the solid colors and then using more of my Army Painter Strong Tone quickshade dip.  That’s the only shading done on them, but this stuff works really well.  The figures had enough sharp detail to catch the dip.

I’m a lot happier with these than I thought I’d be before I painted them.  I don’t like Gauls, don’t like the rest of the army, and don’t really like these sculpts.  They may be a bit too bright, but I skimped and didn’t paint any plaid.