David Kuijt and Dave Schlanger threw down the gauntlet before Fall-In: Paint up 48 points of Hordes of the Things in time for Cold Wars, and they’ll have a matched enemy to fight against it.

Well, I already had a bunch of prepainted D&D fire elemental (and related) figures I planned to build into a HOTT army, so why not do that?  At Cold Wars we played a 72 point Fire vs. Ice battle, and lost, so this project has turned into a grudge match.

Here is the army so far.  I may augment it if I get additional figures for Christmas, which would push it up to 72 points.

The bases are laser cut masonite, with chunks of broken plaster attached using paintable transparent silicone caulk. I built up enough caulk to swirl into a lava texture, and placed the rocks so that on each base, the miniatures would be appropriately either standing on a rock or emerging from the lava.

The lava colors were painted starting with white, then yellow, wet brushed orange and dark orange, and then over the black I applied dark red and grey on top.  Fire is brighter where it’s hotter, in the center, and darker at the edges where it’s cooler, so you end up using the reverse order for shading.  Adding a lighter color over the black can make it lit from below in some places.

The only concern I have about this army is its durability.  The figures mounted on lava are likely to pull the paint off and break off, because I didn’t strengthen the plaster with anything before I painted it.  I’ll just bring lots of superglue and touch them up when I’m finished. 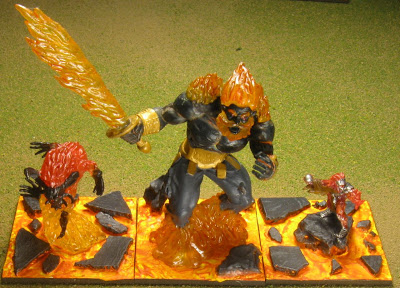 In the center is a Fire Titan (behemoth).  On the right, a magician, and on the left is an Immoleth, which I’ll use either as a God or deep warband (using WADBAG’s excellent variant rules for deep spear and deep warband).

All of the figures shown here are D&D miniatures, except for the Mage Knight figures shown here and the dragon below. There would be a lot more army potential in MK figures if more of them were as good as these.  On the left and right are blades and in the center is an aerial hero.  It’s not very visible from this perspective, but the flame guys on the left are flaming skeletons.

The fire elementals on the left are warbands, and the Azer Fighters and Raiders on the right are blades.  Some of the Azers are repaints of ther crappy model, done to match the not-crappy Azer.

The Magmins on the left and right are lurkers.  The Flame Salamander will be either a beast or a deep warband (they have the same depth).

Here are two fliers on the ends, and either a flier or an aerial hero in the center.  As you can see, when I originally purchased my figures I didn’t consider how I was going to base them, so I have a few mismatched bases that I don’t prefer.  Clearly it means I just need more figures… 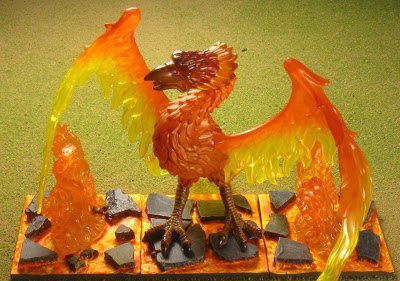 In the center is the impetus for building this army in the first place: a phoenix I bought at Michael’s crafts.  It’ll be a dragon in HOTT.  On the ends are large flame elementals, deep warbands.