Before I got back into driving RC cars, I had spent a lot of time playing Forza 3 and Forza 4, on-road circuit racing games on the Xbox 360.  Although I had only ever driven off-road RC cars previously, my experience with Forza made me interested in on-road RC cars as well.  I’m interested almost exclusively in smaller vintage cars (old cars that aren’t muscle cars).  I also had fond memories of kit building, and my purchase of the ready-to-run Losi buggy made me wish I had purchased a kit instead.

So, put it all together and I ended up with an obvious conclusion: just before vacation last month, I ordered a Tamiya 1/10 scale RC Honda S800 kit, which uses Tamiya’s M-05 FWD on-road chassis (unlike the original’s RWD drivetrain).

The kit went together quickly; almost too quickly to be satisfying.  I had the mechanics and electronics done in a few evenings, and didn’t run into any problems with the build.  I wanted to keep things simple and inexpensive the first time around, so the only hop-up part I used during the initial build was a bearing kit. I remember how much of a pain in the butt it is to add bearings after the car is complete. 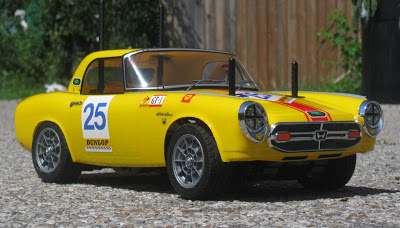 The decal sheet that comes with the car allows you to reconstruct the S800’s most famous racing livery: #25, currently on display at the Honda Collection Hall at the Twin Ring Motegi circuit.  I painted it using Tamiya Yellow polycarbonate paint, with a coat of Pactra white behind it.  The white really helped the yellow shine through, and the result is almost too bright compared to the historical car it’s patterned after.

There are a lot of decals (really just stickers), and they took a long time to apply.  Each one needed to be cut out individually before being applied appropriately.  It ended up being tedious, but not as difficult as I feared to get the decals in the right place without any bubbles.  The end result was definitely worth the work!  This is a really beautiful car.

Comparing the car to pictures of the original, the only places where the decals are at all different is where the original car has holes in the body, but the model has decals.  Specifically, in the rear lower corners there are round decals with an odd shape that doesn’t make much sense, which correspond to holes in the body on the original car.  It’s almost as if the decal designer looked at one picture of the car and made a decal of what could be seen through the hole from his vantage point.

The only complaint I have about the decals is with the ones that are supposed to go over curved surfaces, such as the chromed fender lines and the trunk hinges.  These don’t stick well enough to stay on the car (as seen in the image above, if you know what to look for).  Since they’re simple single-colored decals, I will probably take them off and paint the lines instead.

I had one problem with the car after it was assembled with the body in place.  The rear end of the front fender was very close to the front wheel, and it would catch on the wheel during turns.  This suboptimal body position can be seen in these images. I fixed this by raising the rear body clips so the body was higher in the rear, and angled away from the front tire, and I haven’t had any problems since. It looks a bit better than the “low rider”look the rear has with the stock body position. 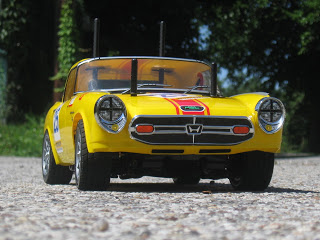 The Honda S800 is a really interesting car. It looks to me like it’s basically a clone of a contemporary MG roadster, similar to Honda’s N600 clone of the Mini.

Today I had my first chance to really drive the car instead of just puttering around in the alley.  It’s so nice looking that I’ve been afraid to scratch it up. But I built an RC model and not a plastic display kit for a reason, so to heck with it.  The kids wanted to ride bikes and scooters in the flat walkway in front of the church across the street, so I brought my car as well.

Not surprisingly, this car handles extremely differently than the buggies I’m used to driving off-road.  On the flat, with no obstacles to run into (and using the stock motor and a 6 cell NiMH pack) I was 100% unable to roll the car over in a corner.  It pushed into corners at speed, which is expected for a front wheel drive, but the rear end cut loose long before the car felt likely to roll.  This FWD chassis is extremely stable, with a very low center of gravity.

The stock M-05 chassis comes with friction dampers instead of oil-filled shocks.  I didn’t want to replace these until I experienced driving without them, but it was quickly obvious why oil dampers are necessary.  The body bounced around a lot when cornering, in a very unnatural and unpredictable way.

After a bit of driving around aimlessly, I set up cones and Ezra rode his bike while I raced him with the RC car.  Flat-out, he was no match for the stock motor, but around the corners his massive size made him very hard to pass safely.  On 3 occasions, I ended up in front of him and he ran over the car.  Oops!  It survived with only scratches (on the inside of the body), so no harm done. I also hit his rear tire a couple of times, which instantly flipped the car due to the tire’s upforce.

At this point, I’ve gotten over my fear of scratching the car; but I’ll probably touch up the paint and apply electrical tape where it’s most likely to hit the chassis. I’m also a lot more interested in driving it than I was before.  I’ve ordered some 3Racing dampers, which are far cheaper than the Tamiya hop-up part.  Other than that, I plan to leave it stock until something breaks or wears out, just as I’m doing with my other cars.