After building the Honda S800, I was itching for a kit that took a bit longer to build.  I also wanted to give the kids more opportunity to participate in the build and in driving the resulting car.  Ezra wanted a Monster Truck, so I searched for one available in kit form and found the HPI Savage Flux XS SS. 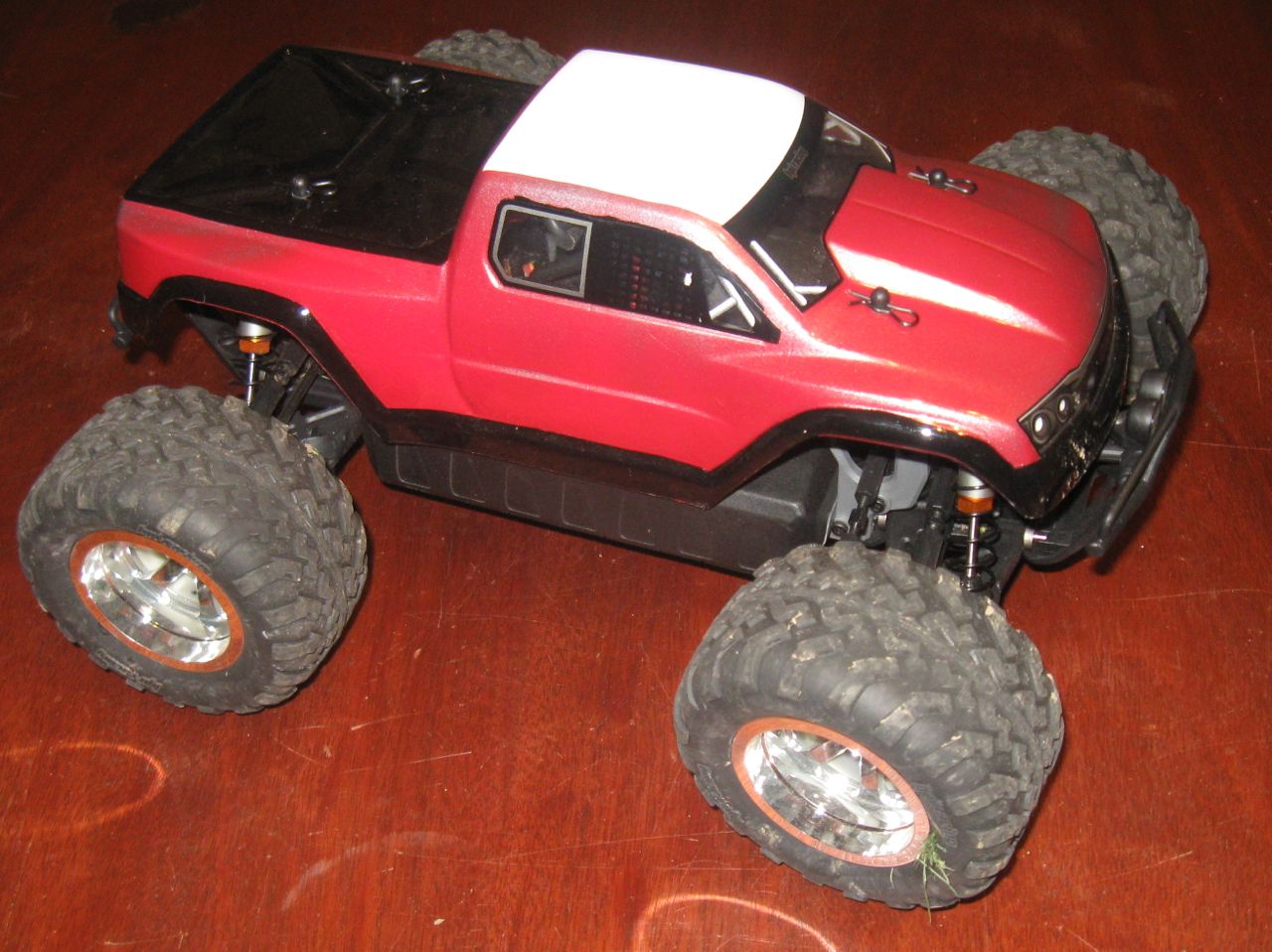 The HPI Savage is their 1/8 scale nitro powered monster truck.  “Flux” makes it electric.  “XS” makes it extra small, with the body being approximately 1/12th scale. “SS” is the Super Sport kit edition.

I finished building the truck, with intermittent help from the kids; but according to Ezra’s definition it isn’t a Monster Truck yet.  A monster truck has to be a truck, but it also has to have monsters on it.  We hoped to find some good stickers for this during the halloween season, but haven’t succeeded yet.

I haven’t driven the car very much yet, so this initial review will be primarily about the kit build itself.  It was definitely a more involved, slower build than the Tamiya M-05 chassis.  Some of this was the fact that it’s 4wd, some is because of the design, and some of it is because of frustration during the build. There are some parts of this kit’s design I really like, but other aspects are pretty bad.

The basic design is quite solid.  The first section of the build is putting together the front diff and suspension arms. The second part is the rear diff and suspension arms.  The front and rear half of the truck are nearly identical: the diffs and bulkheads are the same, and all 4 A-arms are interchangeable.  The main differences are the front and rear hubs (also identical side to side) and the bumpers. Overall this symmetric design makes it more convenient to deal with spare parts.

The front and rear are joined with a two part plastic center chassis that is reminiscent of the twin plate design used on the larger Savage.  The diff and motor are stuffed into it in a single piece, and the servo is buried in there somewhere as well.

One complaint I’ve heard about this truck is the difficulty of maintenance on various parts.  I think there is some truth to this: it’s a very tight truck, some parts are hard to get to, and most of the stock screws absolutely suck (more about that later).  But it’s not as bad as many would have you believe.  This is a lot more evident if you build the kit and see how things go together (and come apart).  You can remove the front and rear diffs for servicing with only a handful of screws.  The center diff and motor do make it a pain in the butt to change pinions often. They can be removed pretty easily; the problem is wedging them back into place with the front and rear dogbones where they need to be.

The absolute worst thing about this kit is the hardware.  Most of the screws are metric M3 with 2mm hex drive heads. The 2mm hex drive is simply too small for the screw material they chose.  The sockets can’t handle the torque required to drive the screws very far into fresh plastic.  I tried several different 2mm hex wrenches, and they all had the same problem: some of the sockets are oversize, and the screw material is soft, so the head ends up stripped.

I ended up stripping at least half a dozen screws during assembly, and had to extract several destroyed screws and replace them.  Luckily, the non-HPI replacement screws I bought work much better.  Several more screws are still stripped, but I managed to drive them all the way in, and hopefully I’ll never have to remove them.  The problem most kits have is accidentally stripping out the plastic.  These screws cause too many problems in the other direction.

For this body, the kids decided they wanted a light blue color, with a white roof and black trim.  They planned to add skull and crossbone and lightning stickers on it, but we haven’t found any reasonable options for either of these yet.

“But, that car isn’t blue,” you say.  An astute observation!  The only light blue Lexan paint I found was very old, and the can got me about 2 seconds of spray time before running out of pressure.  So now, the car has a light dusting of metallic silver-blue, and I filled out behind it with red.  It’s not totally horrible looking, but it was definitely not what we were aiming for.

This is the first time I’ve used Fasmask liquid masking for the interior of the body. The windows came with precut masks, but I masked the roof, bed, and lower edge of the truck.  The Fasmask worked pretty well, but I need to make a few changes next time.  Here are my newbie tips for using Fasmask:

Looking on the Internet, I figured out how people test their maximum speed, for what it’s worth: strap on a portable GPS, and press Go.  I geared this truck down a bit, with the larger spur gear the truck comes with, and it’s being powered by a Duratrax Element (by Castle) 3900kv sensorless brushless setup.  With 6c NiMH batteries, I got up to 27mph in the alley behind the house.
This is no speed demon in its current form, but it’s still way faster than I should be letting the kids play with at this point, so I have no problem with that.
Now we just need to go find some place to bash it before it starts snowing.