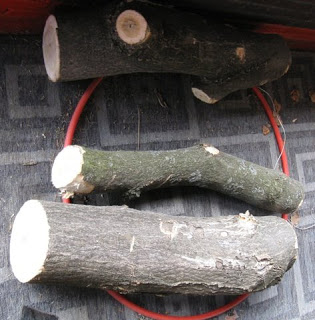 Last week, we had a wind storm with wind bursts up to 90mph. Since then, I’ve been looking for downed trees that people have thoughtfully cut up into portable pieces. Yesterday, we found some logs.

This isn’t a useful way to get boards for building “flat and square” furniture, but most of the wooden boxes I turned in 2007 were made from found logs and Marla’s mom’s firewood pile.

Turning green wood is very fun even if you don’t end up making anything, and it’s a heck of a lot cheaper than buying turning blanks. In the worst case scenario, I’ll make firewood and/or bags of shavings for Ross and Brigid’s chickens. 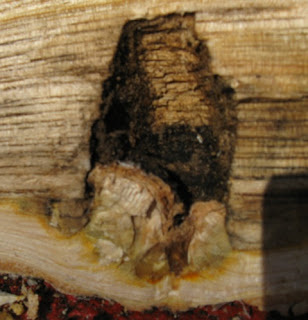 These logs were fairly long for “side of the road, but still portable:” almost 3′. They looked like they had some knots, but also some straight sections. The first order of business after finding logs is to split them, before they split themselves as they dry out. These already had checking (the start of a split) in the ends, and they were cut less than a week ago.

Unfortunately, sometimes 90mph winds aren’t the only reason a tree falls down. In this case, the largest log looked perfectly fine from the outside, but encased an old insect home of some sort. A big pile of black dirt fell out, but no live bugs or even carcasses were there. This log was big enough that there may be some useful wood for spindles around the rotten interior. 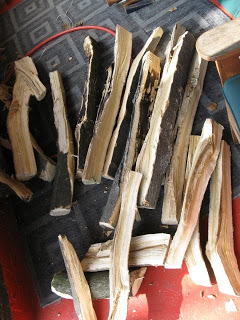 After a bit more splitting, I found a place which looked like it had a perfectly round hole drilled into it, either by a person or an insect. Appartently, the insects got in here, but eventually the tree grew wood over the hole, including bark on the inside of the hole, and blocked it off.

I’m not sure what kind of tree this is. It’s a fairly fast growing open-grained wood, with very light sapwood and yellowish heart wood. It doesn’t have any prominent rays. The bark is fairly thin and smooth.

Nothing is straight enough to make spindles: that would be almost impossible to find on the side of the road. I might be able to find a few places straight enough for legs and stretchers, but it’s a lot better to make those from a harder closed-grain wood like maple.

For now I’ll let these dry outside, while we find time to make room in the basement for them.