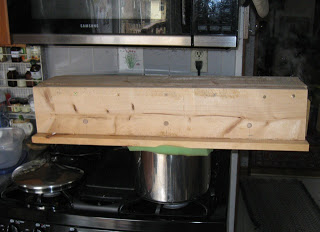 I had some free time today, so I decided to bend the rods for the rodback chair.

I built the steam box a week or so ago. The bottom board is a 11″ wide pine board, and the upper portions are made from dimensional 2″x6″ lumber. It’s heavy, but it works. There are 3 dowels set into the box, to raise the parts to be bent above the bottom of the box.

I closed the box as Brian Cunfer did: using open-celled foam (like chair seat foam). Where the box sits over the pot, there’s a 4-5″ hole. I used 3/4″ or 1″ foam at the seam with the pot to make sure it’s sealed fairly well. In each end of the box I used a chunk of 1 1/2″ thick foam to seal the ends, while still letting steam pressure out. The wood joints are sealed either with gorilla glue or silicone.

I made two bending forms from 2″x6″ lumber screwed onto plywood. One side has the shape of the rod, and there are blocks to wedge the rod against and hold it into place. The parts should dry on the form, so in order to have a spare “just in case,” I made two forms so I could bend two parts at once. 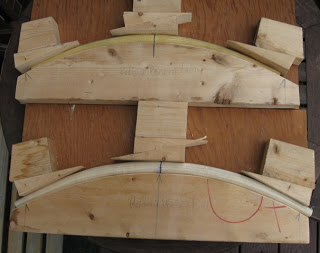 The rodback sticks are about 20″ long. I shaved one from ash a week or so ago. The other I made today, out of the odd greenish/yellowish open grained wood I haven’t managed to identify well yet.

I steamed them for 45 minutes in the steam box. The pan started about half full of water, and didn’t come close to running out. After that, you have to work quickly: bring the stick to the bending form, bend it into place, and pound wedges in to hold it onto the form.

The ash felt quite stiff when I bent it; basically what you’d expect a green stick from a tree to feel like when you bend it. It didn’t crack, so the initial bend was a success. But, I wouldn’t be surprised if it sprung back at least a bit after it has dried.

When I bent the other stick, it felt the way I remember from the previous times I bent parts. The stick resists bending pressure, but then releases. I want to describe it as a “chalky” feeling, though I’m not sure why. I’m more confident this stick will stay bent.

Neither of the bends were immediate failures, but we’ll see if they stay bent in a week when I take them out. I think it’s likely they will both work.

While I’m waiting for the spindles and rods for the chair to dry, I’ll build the lower half of the chair: basically, everything I’ve already done for stools, but with a place to install the top. I’ll drill the holes for the top before I carve it, but the upper portion isn’t assembled until after the entire stool is complete.