Well, it turns out we’re City Folk. This was a conscious decision, but I don’t always remember until I’m out of the city. I was reminded when the whole family went up to Ross and Brigid’s house on Memorial day. They might not call their place “the farm,” but it is from our perspective.

I rode my bike up, and everyone else went in the car. This avoided any problems with my back seat driving, and I got a nice 19 mile ride in. 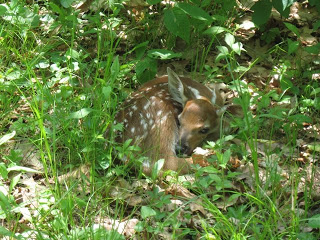 But before I even got there, I missed all the fun. One of Brigid’s neighbor’s told them a pair of deer were born that morning, so everyone (except Robin) went out for a visit before they left.

The mother was gone, and the babies weren’t very human-shy yet. Ezra asked, “Pick up deers? Pick up deers?” and they would’ve been small enough to pick up (for an adult). They were only a few hours old. One of them was still wet, but the other one could already stand and walk around.

Later, Marla helped paint the nursery, and I went 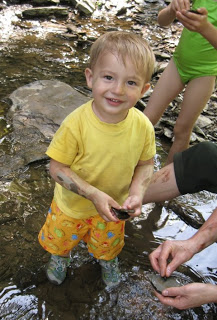 down to the creek with Brigid, Robin, and the kids. Robin enjoyed a little swim on the hot day, and Brigid and the kids caught some crayfish and minnows.

The real excitement started when Brigid showed us how to make “paint rocks.” With the soft sedimentary stones out here, you can rub two wet stones together to make a paint-like paste. We found a good selection of browns, greys, black, orange, and red, but no blue, green, or white. We probably could’ve found a good match for the new nursery walls. The red doesn’t wash out very easily.

After we got back, the kids played around in the pool and visited the chickens. Ezra reenacted Queen’s Bicycle Race video on his tricycle (no pictures, this is the Internet after all). We ate dinner, and before long it ended up late.

I took a different route home, and Marla left 40-50 minutes later. We got home at about the same time, and as usual, the kids would have preferred to stay up late instead of going to bed.