Last year, a cyclist from one of the mailing lists I read visited Pittsburgh from somewhere in the midwest*, and we took him on a ride. He explained his experience riding in hills: “I rode the Hilly Hundred.” This was a century (a 100 mile ride) with the route chosen especially to hit as many hills as possible. “It had 2000 feet of elevation gain!”

I nodded and smiled, but didn’t really think that sounded very hilly. Our 20 mile ride that day turned out to have about 1800 feet of elevation gain, without really trying very hard. It wasn’t his fault- there just aren’t very many hills out there.

In the midwest, you need to go out of your way to find any hills at all, but in Pittsburgh it’s difficult to avoid them. You can stick to the river trails and rail trails, or stay in the flats around Oakland and Shadyside. But if you want to bicycle to go somewhere, instead of going somewhere to bicycle, you’ll eventually encounter hills of the “up” variety.

Maybe it’s just Stockholm Syndrome, but I have come to enjoy hills.

Hills are certainly a physical obstacle, but they can be an even greater mental obstacle. In the worst case scenario, you can always walk your bike up any hill you could walk up. But most often, stopping for a rest is all that’s really needed: today’s mountain bike gearing goes almost as low as walking. At that point, it’d be a greater challenge to maintain balance at such a slow speed, than to provide enough power to get up most hills. It seems natural to stop for a rest when you’re walking and become tired. Why not do the same on a bicycle?

For fast riders, wind resistance slows them down more than hills do. This is why racers make a great effort uphill, but coast downhill. If you waste your effort pedalling downhill, everyone else will just get behind you, easily keep up with you, and pass you well-rested at the bottom of the hill.

For the rest of us mere mortals, headwinds can be at least as bad as hills, even when your ground speed is relatively slow. There’s nothing worse than having to pedal down hill to maintain a reasonable speed.

Hills provide several benefits. The most obvious is that without hills, you never get to go down hill either! I like going fast, and “downhill” provides my best opportunity. I’m comfortable descending at speed, especially on hills I’m familiar with. Descending safely but quickly is a skill well worth striving for, and very attainable to anyone with a well-tuned bicycle.

When I first commuted by bicycle to and from work, I chose routes which had long shallow ascents, and relatively steeper descents. These are longer but less steep than the more direct routes. Eventually, I started riding a steeper, more direct route when I needed to get home quickly. Now, the longer, less steep routes don’t provide enough challenge, so I end up searching for longer, steeper routes home. This lets me get in more exercise in a limited time. It doesn’t extend my ride home very much to take a hillier route, but I put in a lot more effort going up steeper hills. On weekend rides, I can stay a lot closer to home with more exercise, if I choose a hilly route.

Hills provide a good way to judge your progress as a cyclist. Riding up a difficult hill is a memorable experience, whether you succeed or fail. The key is to turn your bad memories of the past into success in the future. The first time I rode up Swinburne street, before I started commuting to work, I nearly died in the Sestili nursery parking lot (at least it felt that way). Now, I make it up that hill easily, and it’s not the steepest route home I regularly ride. It is fun to go back to a hill that “beat me” and make it up without stopping for a rest. You can do this even if the hills that beat you now aren’t very steep. 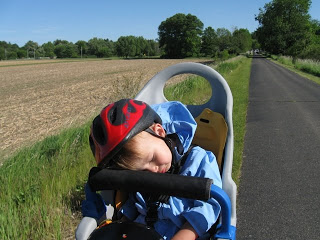 Hilly terrain is a lot more interesting to me, than the “flat, straight” rail trails I’ve ridden in the midwest. We went to Mill Creek Park in Youngstown this weekend, which had some interesting hilly roads. The nearby MetroParks Bikeway, shown here, is considerably less interesting to me, personally (Ezra would’ve been happy to sleep anywhere).

My favorite hills are “rollers” which are matched well with my pace. On rolling hills without stop signs, you can carry most of your downhill speed up the next rise. With a minimum of effort, you can reach the next crest and continue your descent down the next hill. I haven’t encountered many rolling hills around here which match my speed well, but they’re a joy when I find them.

Although Pittsburgh has steep hills (the steepest paved street in the US, in fact) we don’t have many long ascents. I’ve heard stories of the mountains out west, where you can climb for an entire day’s ride, and then go down the other side the next day. That sounds like a good challenge, but not one I’m likely to face any time soon.

I would like to ride up “Mount” Davis some time, though. It’s the highest point in Pennsylvania, but it’s the high point on a ridge and not a true peak. Apparently there’s a long ascent to the top from Confluence, PA. That might make a nice day trip this summer…