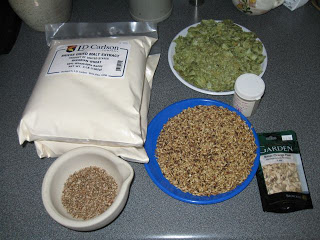 Since Ezra was sick and no one showed up for “brew day” today, I took some pictures.

I generally write down my final recipe just before I start brewing, to refamiliarize myself with the ingredients and process. I also collect my measured ingredients in one place, a practice I picked up while cooking. Here are: 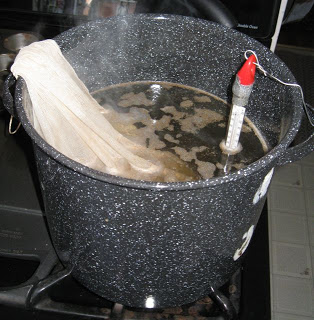 First I heat about 3-4 gallons of water up to 160ºF, put the grains (only crystal malt, in this case) in a grain bag, and steep them for half an hour. This is the chimpanzee second cousin of the grain mashing process used to extract sugar from malted grains in a full-mash brew, but it’s fine for the small amount of grain used in extract brewing.

I use the thermometer at a few important points during the brewing process, but most of the time the temperature doesn’t matter or is known (boiling water): 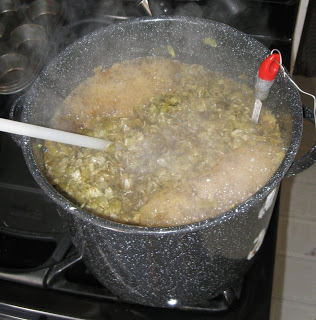 Aftter the grains have steeped, I remove the bag and squeeze it out. Before turning the heat back on, I add all of the dry malt extract, and stir until it’s dissolved. Then, stir constantly while bringing the pot to a boil. Watch out: it is very easy for the pot to boil over when it gets to the boiling point, as well as smelly and annoying to clean up.

Once it’s boiling, I add the bittering hops (all of them in this case), and start timing. At this point I’m boiling the “wort” or unfermented beer. I boil for an hour total. The bittering hops boil for an hour. If I had any finishing hops, they’d be in for 10-15 minutes. In this batch, I boiled the bitter orange and irish moss for 15 minutes, and the coriander for 10 minutes.

After everything is boiled, the wort needs to be 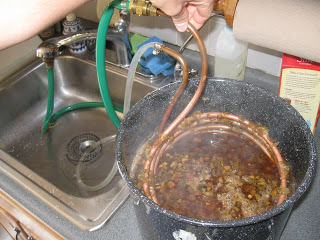 cooled to fermentation temperature as quickly as possible, so no bad bugs start growing in it. With a partial boil as I do, where I don’t boil the full volume of wort, it’s a bit easier: I have to add several gallons of cold water, which cools things down quickly.

But first, I cool the wort to a low enough temperature that it won’t require any more cooling once it’s mixed with water. For that, I use a wort chiller. This is just a coil of copper pipe, which I pipe cold water through. I put the chiller in the pot while it’s still boiling to sanitize it. After the boil I just pump water through the 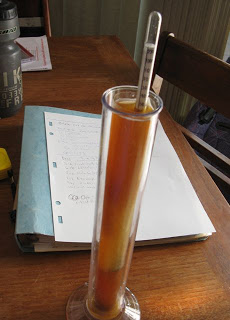 chiller and shake it, while keeping an eye on the temperature, until it’s down to about 110ºF.

After dumping everything in the femernter bucket, I stir thoroughly and try to introduce air, which helps the yeast get a good footing early on. Before adding yeast, I take a sample and measure the specific gravity. This original gravity measurement can be used to approximate the potential alcohol content of the beer. Further gravity readings show how far along fermentation has progressed.

Next I pitch the yeast. These days I use liquid yeast cultures. I create a “yeast starter” a few days ahead of time to increase the amount of yeast I’ll pitch. I also take samples of yeast from past batches of beer and propagate those, so I end up buying yeast less often.

I always make complete notes of what I do on brew day, and update them throughout the process. Sometimes I even remember to take notes on how the beer tastes.

Finally, and most importantly, clean everything up.