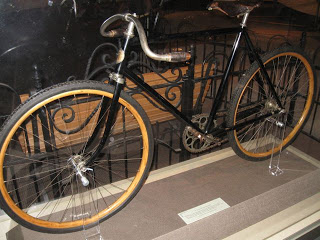 It’s pretty well known that Orville and Wilbur Wright built bicycles before they built airplanes. The Smithsonian Air and Space museum has one of the five Wright bicycles currently known to still exist. It’s eleventy-one this year (111, built in 1898) and still wouldn’t look all that out of place if someone rode it down the street today.

It has wooden rims, which were standard issue at the time. Wooden rims were replaced by steel, and then aluminum. Now, carbon fiber rims are not uncommon for “weight weenies” who aren’t afraid of a little wheel explosion once in a while.

Interestingly, carbon fiber rims have some of the same problems as wooden rims: they aren’t a good surface for brake pads, and they tend to shatter when they break instead of failing gracefully. Wooden rims are still available, I wonder if they’ll make a comeback?

Leather saddles like the one on this bike are still available. In fact, Brooks had already been building saddles for a decade when that bicycle was built.

This bike has a single speed hub with a coaster brake, and a skip link chain (or maybe a block chain?) These chains and sprockets seem to be the only part on the bike which I don’t think is made anymore. (The handlebar shape would look a lot more common if you turned it upside down. Or right-side up?)