I saw a bottle of absinthe at the PA state liquor store, and thought… That can’t be real absinthe; absinthe isn’t legal. I did just enough research to discover I was wrong: in 2007, the US laws which prohibited sale and/or distribution of Absinthe were relaxed. When we were in Ohio, I found a much prettier bottle of Absinthe than they had in the PA store, so I thought “I’m on vacation, why not?” and bought it. (See? Marketing works.) 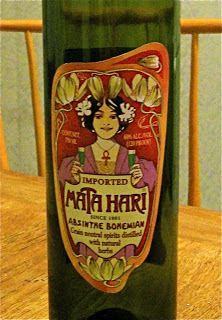 You all know about Absinthe. It’s green. This “green fairy” causes hallucinations, general depravity, and drives men crazy. If you drink it you’ll start painting like Van Gogh or Picasso, and writing like Poe or Hemingway. The oil of wormwood is poisonous and will liquify your kidney in short order. It’s evil, and they made it illegal for good reason.

It turns out that in reality, most Absinthe is green, but not all of it is. Everything else is pretty much bad PR. Absinthe is no more toxic than any other alcohol in the 100-140 proof range. The levels of wormwood are regulated, and low enough not to be poisonous. The drink is not hallucinogenic, whether you like it or not. Drinking absinthe doesn’t make you crazy, but I expect most people who taste it would say that only a crazy person would drink it.

I wasn’t familiar with the traditional technique for preparing absinthe, so I followed the alternate instructions on the bottle: “serve it on ice.” My first reaction to Mata Hari Absinthe Bohemian was that it tasted similar to Jäegermeister or Zwack, but it was far more alcoholic and not at all sweet. It had a very strong anise smell, and an herbal taste.

Then I read the bottle, which described it as being comparatively light in the Anise department. After sitting in my glass for a while, I noticed the drink changed from a bright transparent green color, to a cloudy greenish-white. That’s odd. Eventually, I started reading about Absinthe in general, and learned some very interesting things.

Absinthe is a spirit, not a liquor: it has no sugar added after it is distilled. It’s one of the only spirits which is typically watered down before drinking. The traditional method of preparation is to hold a sugar cube with a slotted spoon over your portion of absinthe, and drip cold water over it until the sugar dissolves into the drink. The addition of cold water causes herbal oils to precipitate out of the absinthe, turning it cloudy (as I had observed). This cloudiness is called “the louche” and the addition of water is called “louching.”

Drinking absinthe became associated with artists, bohemians, and other ne’er-do-wells, and eventually got a bad reputation. Of course, those who drank it were fine being associated with this reputation, which only made it worse. In the early 20th century, absinthe was made illegal to make, to own, or to sell, depending on what country you were in at the time.

I’m glad that in the end, “we” came to our senses and viewed absinthe objectively instead of through the cultural filters of the time period when it was made illegal, and finally recognized the relative harmlessness of this particular flavor of alcohol. One can only hope that this good sense and good policy is eventually extended to other equally vilified, but less toxic substances which are currently illegal in this and other countries.

I enjoy experiencing interesting beverages, and I’m glad to have tasted absinthe. However, it’s expensive enough that I’m unlikely to buy it regularly.