In August, we visited Pam and Bob in Ligonier for the weekend. While I was there, I learned there was a reconstructed French and Indian War fort there: Fort Ligonier. Who knew!

Every year, they have a weekend long celebration 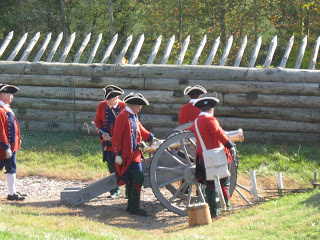 Most of the craft vendors were’t my thing. Some of the artists with shops in town have much better work than the people they invited for the weekend. They did have an interesting blacksmith doing demonstrations, though.

I was more interested in the events at the fort itself. Besides reconstructing the entire fort in its exact original location, the owners have also crafted reproduction cannons, wagons, and other buildings on site. They held an artillery demonstration twice each day during the weekend, when they fired the reproduction Big Guns. They fired a wall gun, a swivel gun, a 6 pounder cannon (shown in the picture above) and a 12 pounder. I wouldn’t have wanted to be driving by during the demonstration: the guns are set up in “SUV hunter” positions on the highway side of the fort, and they’re loud!

Later, they held a small reenactment of a French 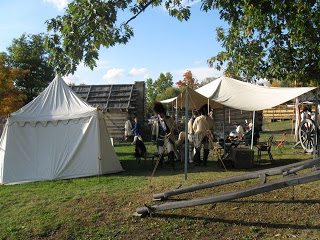 and Indian attack on the British-held fort. During the war, the fort was attacked twice but the British held it both times. In the fort there were British and provincial troops, and the attack was made by a group of French who were camped outside the fort (as shown in the image to the right).

The French grenadiers threw grenades over the wall to get the defenders away, scaled the wall with ladders, and then blew up the gate to open it for the rest of the troops to enter. They then demonstrated standard European style combat with two firing lines. They fired their muskets (with blanks) but didn’t simulate casualties.

The fort is quite interesting. It’s located literally across the street from Bob and Pam’s house, right in the middle of town. It is completely unrelated to the government: privately owned, privately funded, and not a park of any sort. They allow tours through the reconstructed buildings on the premises (for an entrance fee), and have reenactments by volunteers several times per year.

Just before Fort Ligonier Days, I learned a bit more about the French and Indian War. Have you ever heard of “Braddock’s Last Stand,” aka the Battle of the Monongahela? Neither had I. But it happened only a few miles away from our house! Unfortunately the “battlefield” (it was woods, not a field, at the time) is now under a hundred years of city and steel mill, near the appropriately named Braddock, PA.

General Braddock was marching from Fort Necessity towards Fort Duquesne. Just after crossing the Monongahela, his slow-moving column was attacked by French and Indians. They were decimated because they maintained their European line formation and tactics during a wilderness skirmish. Braddock was wounded, and died shortly afterward outside Fort Necessity. A little-known officer named George Washington led the retreat, and learned from the mistakes made that day.

I’m not sure if I learned more about the American Revolution as I was growing up, or if I just remember more of it; in either case I’m sure it’s because New England seems to have a much greater affinity for the Revolutionary war than the French and Indian war.