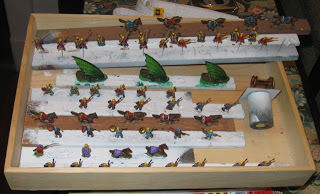 Here’s an in-progress picture of my latest painting projects. This is another DBA army, II/7: Later Achaemenid Persians. There are also three frigates from Uncharted Seas in there, they aren’t Persian ships.

This shows how I hold the figures for painting. Similar figures are hot glued onto a stick, far enough apart that I can reach all parts of the figure. Horses are primed in brown or grey since that’s the primary color they’ll be when they’re done. The rest are primed in white, grey, or black depending on which color I think is best that day (and somewhat depending on what color is going over the primer).

These figures have just come in from being sprayed with matte varnish. After that, they’re removed from the sticks, and glued to bases. Then I paint and decorate the bases. These will fill 16 stands of figures (4 cavalry, 1 chariot, and 11 infantry elements).

I’ll have pictures of the finished army soon. This looks like it’ll be a fun army to play with, except for the fact that they’ll always have to lose against Alexander the Great.