Here is the Later Achaemenid Persian army, finished. These are Essex 15mm figures from their DBA army pack. The only optional elements I didn’t paint are the scythed chariot and the cavalry general.

The color schemes are all based on images in the Osprey book on the Achaemenid Persians, which are taken from the Alexander Sarcophagus and the Alexander Mosaic. “Yes, they really did wear that much purple and (saffron) yellow.” But also notice that almost everyone is wearing expensively dyed fabric instead of armor. 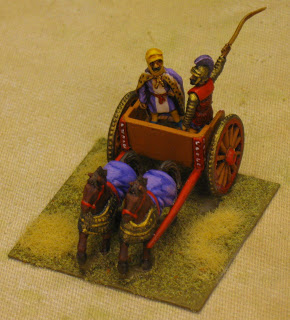 Here is the general on his light chariot. Since this army will be playing primarily against Alexander the Great, I consider him to be Darius III, king of Persia. I almost displayed him facing backwards, since he always seems to be fleeing from Alexander in historical images. 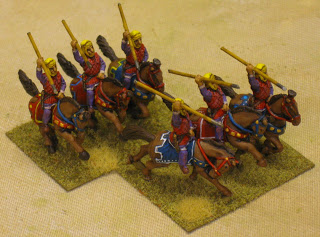 Two Cavalry elements. I’m least happy with the shading on these guys’ hoods. I should’ve used a lighter ink, but I didn’t. It’s not as obvious in pictures. I’m also not sure about the armor; it doesn’t match anything I’ve seen in books. 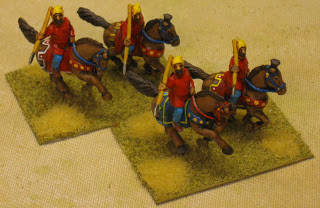 These are the two elements of Light Horse. 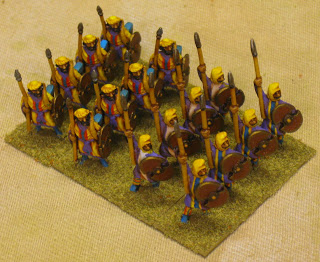 Here are four elements of spearmen. I’m not very happy with the choice of figures here, because I’m intending to use this for a very late army. These “Dipylon” shields are a hundred or more years out of date by Alexander’s time. The rear ranks are “immortals” from earlier Perisan armies, and it’s kind of weird that they’re carrying bows as well as spears and shields. They’re shown wearing older long Persian robes instead of the shorter Median style tunics and pants they adopted later. The front ranks are painted like Darius’ spear bearers (bodyguard).

They look nice, and work the same way on the table, but they aren’t likely the spearmen faced by Alexander. 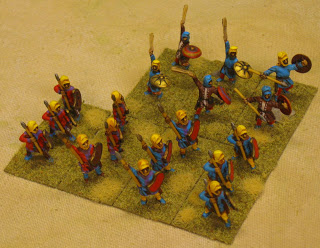 In the front are 4 elements of Auxilia, Takabara. These are fairly good figures, but I think the shields are too small. I made an attempt at adding a few shield designs, but it didn’t work very well. In the rear are three elements of Psiloi: Persian slingers and javilenmen. I’d rather have bows tha javelins.

Overall, I’m happy with the way it turned out. I can’t bring myself to spend a lot more time on 15mm figures, but with only rudimentary shading.