Games Workshop’s Man O’ War has been out of print for a long time. After failing to find any reasonably inexpensive copies, I started looking for alternatives, and came across The Uncharted Seas.

Uncharted Seas is a fantasy naval miniatures wargame released a year or so ago by Spartan Games in the UK. The ships are nominally 1/600 scale, but since they’re fantasy themed and there are no humans to compare them to, it’s hard to tell. The largest ship in the image above, the Dragon Lords Battleship, is over 6″ long, and the smallest ships, frigates, are just under 1.5″ long. The sails are metal and the hulls are separately cast resin.

Frank and I liked the look of this game, so we bought a starter set each and the rules. Frank chose Iron Dwarves, and I chose Dragon Lords. The dwarven boats are almost identical copies of some of the better looking Civil War ironclads. The dragon lords ships have sails patterned after dragon wings.

Each starter set comes with one battleship, a squadron of three cruisers, and two squadrons of three Frigates. The game is new and Spartan Games is fairly small, so they have a few additional ships available for each fleet, but certainly not an overwhelming volume of “stuff you need to buy.”

The models are quite pretty, and are high quality 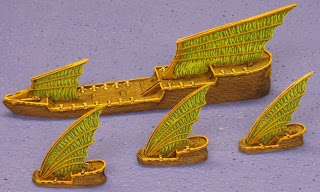 castings. The resin parts are cast very cleanly and needed minimal cleanup, but the bottoms needed a pass over sandpaper to flatten them out. The only flaw I had with the resin was evidence of its brittleness: the railing was cracked off in a few places, and I had to repair this with putty. The metal sails needed a bit more cleanup on their edges, and didn’t fit perfectly to the shape of the hulls. I chose to solve the problem with epoxy, but drilling the hulls and sails and using pins might have produced better results.

My initial color choice, shown in the oddball Frigate squadron above, was disappointing. The switch to a brown hull and dark yellow spines on the sails improved things immensely. Painting the ships was quite fast using standard inking and drybrushing techniques, but not as fun as I had hoped. The textured surface of the Dragon Lord takes drybrushing very well, and the boards in the hull show ink perfectly. The only real fiddly bits on the Dragon Lords ships are all of the tiny ballistae on the decks of the ship, which are smaller than crossbows for 15mm figures. Everyone else gets cannons, which would be much more fun to paint.

The rulebook has quite high production quality. It’s printed in full color and is very glossy. There are many inspiring photographs of painted fleets, as well as digital images showing other paint scheme ideas.

Unfortunately the text itself isn’t very good: this is YAUBR (Yet Another Unintelligible British Ruleset). Some rulebooks put 10 pages of rules in a 100 page book and fill the rest with fluff and exposition, making the rules hard to find when you need them. Others put 10 pages of rules on 1 page using tiny font sizes, arcanely terse writing styles, and a heavy dose of omission; an index is impossible without the use of line numbers instead of page numbers.

The Uncharted Seas rules don’t fall completely into either of these categories, but have some problems nonetheless. The rulebook constantly comments on the rules, explaining how simple they are and that they were chosen to make the game fast and exciting. Much of this would be better if it were left out, or put into a “designer’s notes” section. Unfortunately we came across questions which seemed to be unanswered in the rules, so we basically just made stuff up or decided how to handle things on the fly until we could consult a FAQ… except, there isn’t a rule FAQ, only a forum.

Another downside to the rulebook is, the rules have changed since the first printing. Updates are freely available on the Spartan Games website, but this is inconvenient. The new rules make sense where the old ones didn’t, at least. I’m not sure how much has been fixed in the second revision of the rulebook, but I’m going to wait for the next revision before I buy another copy.

The rule book comes with templates and counters you can copy and cut out, and third parties have already produced laser cut plywood/acrylic alternatives. At first I thought it might have been nice to have some thicker cardboard templates in the rules, but at this point I think I prefer the thin cardstock: the templates often get in the way of other ships, and you can slip the cardstock under another ship or bend it out of the way fairly easily. 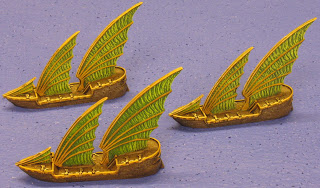 Although the rulebook is not perfect, the rules themselves are quite good, and not difficult to learn or play. The basic feel of the game is very similar to Battlefleet Gothic (BFG), but it’s simpler and faster to play. Luckily, not much is lost in the process.

There are a few basic tactical problems you face in “broadsides” naval games like this:

We didn’t encounter the first problem, because both Dragon Lords and Iron Dragons are immune to the wind (human, elf, and orc ships are not). The “broadsides” problem was present in Battlefleet Gothic and showed itself here as well. The ships themselves felt faster than I remember ships being in BFG; the 4’x4′ board felt crowded with 5 islands and the two starter fleets, and the edge of the board came a lot more quickly than I expected.

The basic combat mechanic is well known to anyone who has played a Games Workshop game: roll more d6’s than you can hold in 2 hands, and hope you get a lot of 6’s. However, as anyone familiar with statistics knows: despite superstition, rolling more dice produces a much more even distribution of results than rolling only a few. Rolling lots of dice doesn’t necessarily make the game feel more random, and this combat system works quite well for its suited purpose.

In terms of ship effectiveness, it’s clear that the battleships kick butt and frigates are mostly useless. You can effectively take on a ship one class larger with several of your boats, but it would be very difficult to put much of a dent in a battleship with your frigates.

Overall, we both liked the game enough to be interested in buying more ships. I’ll likely get a Dragon Carrier, which launches dragons instead of airplanes, and a squadron of Heavy Cruisers. They also have a Flagship for each fleet, a slightly larger battleship, but the rules for those aren’t finished yet and the rough draft looked unimpressive. I may just get another battleship for variety though.