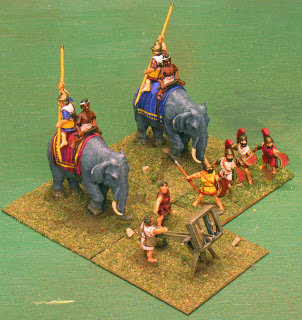 In between painting up DBA armies and Uncharted Seas ships, I sneak in a few random DBA elements to round out my other armies. These are all Essex figures this time around.

In the lower right is an element of Greek peltasts (4Ax, auxilia) for my Spartan army that I forgot to show last time around. Not very exciting, so I figured I’d get it out of the way first.

The two Macedonian elephants are intended for use to morph my Alexandrian Macedonian army into an Alexandrian Imperial army and/or any of the earlier armies of Alexander’s successors that happen to require elephants.

Unfortunately I mounted the drivers back too far, they should really be on the elephant’s neck. I mounted the pikemen facing rearward, based on convincing arguments I read in a recent issue of Slingshot: Elephants can take care of themselves up front, they don’t need pikes up there. And those model pikes are about half as long as they should be in real life, they don’t even reach the ground. Unless you’re facing rearward it would be nearly impossible to swing a 20′ long stick from one side of the elephant to the other, to protect the beast’s vulnerable underbelly and hind quarters from someone else’s pointy sticks.

In the front is a ballista, the artillery element for the Alexandrian Macedonian army. It’s not as impressive as a Trebuchet, but it was all there was those hundreds of years earlier. The only case I know of where Alexander used artillery was in the siege of Tyre, which is completely inappropriate for playing in DBA anyway, so I didn’t paint this element initially. But it’s easier to build some of the successor armies with it, and it was easy, so I painted it.