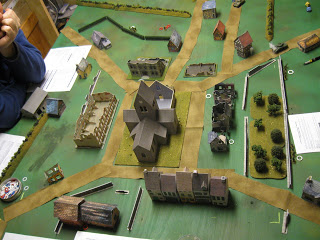 Since Mike was in town for the weekend, I planned a “big” miniatures wargame scenario. World War II is still Mike’s favorite period as far as I know, and I have plenty of troops and terrain in 15mm to put on a good show. However, we haven’t played any WWII rules in several years, and I was planning on 5 players: 2 more than we ever had when playing WWII games previously.

I decided to use the Disposable Heroes rule set. Although we had never played these rules outside a convention, I remembered them being easy to learn and not too fiddly. We preferred Arc of Fire when we most recently played WWII skirmish games, but those rules take a bit more learning than I wanted to put in for one night of gaming.

Since I haven’t studied any World War II history in a long time, I decided to use one of the canned scenarios from the SkirmishCampaigns books I had on hand. I needed a big enough order of battle for 5 players without many vehicles. I chose Attack on Ste. Marie because it used a fairly large board and had enough squads to split 5 ways. It’s one of the scenarios from the “Normandy ’44- First Hours” scenario book. We played it once before, years ago, so I knew I had the terrain. I also wanted to build a game around my fancy French church, so I could use it for more than one game over its entire lifetime. After I set up the board, it really didn’t look very familiar, so I wonder what we did the first time?

In this operation, US paratroopers who were airdropped into the area only 12 hours earlier were tasked with capturing the church in the center of town. The German defenders were also heavily armed, highly trained paratroopers. To answer Mike’s question from turn 1 in the game: the Germans didn’t get artillery support because their observer in the church steeple was destroyed by US paratroopers using a captured German gun. I was worried about Disposable Heroes’ lack of hidden unit rules, so I didn’t give the Americans any artillery support either.

The Germans were defending with two Fallschirmjaeger squads, one platoon HQ, one artillery radio team, and one Panzerschreck team. The Americans attacked with two Paratrooper Infantry squads, two Infantry Squads, 4 Sherman tanks, and a jeep with MMG.

I broke all squads into two teams each, for unit activation purposes. The vehicles were one unit of tanks and one jeep unit, until we enough vehicles blew up, at which point we switched to one vehicle per unit/activation.

Mike played the German defenders, and Andy joined him when he arrived. Frank and I attacked with the Americans. When Dan arrived, he took over the vehicles, and finally I switched sides when Mike got bored (sick: he failed his guts check) enough that he had to leave (and there weren’t many tanks left). I’m sorry you weren’t feeling better, Mike! So I thought I’d write this up so you can see what you missed…

In the first few turns, the American infantry found heavy cover within firing range of the enemy, and holed up. With both sides under heavy cover, no one was hitting the enemy very much; and paratrooper Guts scores prevented everyone from failing any morale checks. It turned into a trench-like war of attrition. Unfortunately Frank was playing the Americans, so my Germans (after Mike left) were pretty much impervious to his attacks.

The tanks were a different story: the first several turns each saw one or more vehicles destroyed. Finally Dan drove a tank out of range of the rockets, while keeping the enemy within MG range. At that point the rules demonstrated the pointlessness of bringing a gun to a knife fight: Dan spent so many turns trying to acquire his target that his infantry had killed it before he could shoot anything other than his pintle HMG at it. One more infantry squad would’ve helped a lot more in this rule set, than the 4 tanks.

In the end, the infantry ruled, which is to be expected in an infantry game. Dan’s Americans advanced from the West and were decimated in the open (as they should be). Frank tried to advance through the orchard in the north, but met with strong resistance from the occupied townhouses.

Finally, it was turn 8, but the Americans hadn’t made a lot of progress. They calculated that the only way to even reach the church was to send one or more units sprinting towards it while the rest provided cover. On the last turn, I pinned the sprinters just before they ran out of cover towards the church. The Americans cleared the final German out of the church tower that turn, but it was too late.

In the end, the Germans had 6 infantry left (out of 33). The Americans had 11 infantry (out of 48), 1 functional tank, and one rolling coffin (out of 5 vehicles). The losses were huge. By percentage they were slightly worse for the Germans, but unfortunately the Americans weren’t able to capitalize on their advantage.

If I were planning on playing any more WWII skirmish games, I’d do one of two things: either look into a more recent version of DH available for sale, or just give up and spend my effort on Arc of Fire instead (more likely).

Overall the game was fun, and it allowed people who don’t know or care much about WWII or miniatures games to roll dice and kill the bad guys. But it did feel a bit like a luck-filled dice fest, and lacked some of the subtleties I remember from Arc of Fire.

I really enjoyed being able to set aside the time for a “big” miniatures game outside a convention, which is rare these days since I have kids who aren’t opponent aged yet. I wish Mike was able to enjoy it a bit more, though. I’d love to get another game set up for Christmas, but I’ll concentrate on something a bit less serious. Maybe we can play my French and Indian War scenario in Blood and Swash?

Thanks for a great game, guys! Until next time…