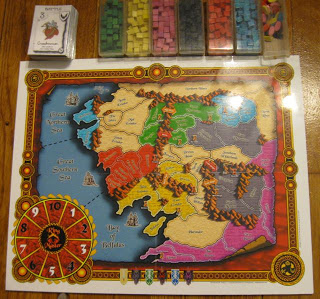 Ringmaster is an Italian circus game. Actually, it isn’t: it’s a freely available, print-and-play, vaguely Lord of the Rings themed strategic wargame. It is Italian, though; or more accurately, originally written in Italian and then translated into English.

I was in the mood for a multiplayer wargame this past weekend, but don’t have any suitable titles on hand, so I looked for a Print and Play option. I found Ringmaster on the Print and Play blog, and printed it up.

I printed the board on photo paper (4 sheets; Marla bought a ream at Costco so I don’t mind using a few sheets) and mounted it on foam core. It isn’t perfect, but it came out really nice. The art and finish quality are a lot better than many low-budget store bought games. The cards are worse: they’re printed on plain cardstock and stuck into card sleeves so they can be shuffled more easily. Coincidentally (probably not) the 6 army colors used in the game match the 6 armiy colors in my old thrift store era Risk game, so that worked out well for the army pieces.

The game is completely card based, and uses no dice. During play, it looks a lot like Risk, but it’s more fun and not nearly as painful.

On each turn, first you can cast magical spells or use artifacts (cards). Then move armies from one or two adjacent territories to as many other territories you want. Any territory with more than one player’s armies has a fight. Finally, you get troop reinforcements and new cards based on the number of territories you hold, and it’s someone else’s turn. The first player to get 10 victory points (gained by taking other players’ territories, but not from holding your own) wins.

Combat is card based. The non-magic cards all either add combat value to the number of troops you brought to the fight, or modify combat values in some less direct way (removing defensive bonuses or nullifying the enemy’s cards). Whoever has the biggest number wins, and the loser loses troops equal to the difference.

The rules are easy and straightforward, but they do have a few questionable points. Unfortunately the author only speaks/writes in Italian, there are a few problems in the translation, and no FAQ is available. (We were entertained by “Take a card from an opponent casually,” where “casually” was clearly meant to be “randomly.”)

Theoretically the game should take about 2 hours to play, but it was our first time so it took us 3 hours. Somehow we often take a long time with wargames. We must think too hard or talk too much.

Ringmaster is quite a good light strategic level wargame. It has only a low to moderate feeling of randomness, due to the card-based combat. You have your cards before you decide to attack, which helps immensely, as I predicted in a previous blog post about randomness. There felt like a bit of a “runaway leader” effect, but it was mostly manageable by ganging up on the leader (although Frank won in the end anyway: no dice!) The end game is very much unlike Risk, luckily. Since you only need 10VP to win and not “everything on the board,” the game ends before it gets boring.

We played the “basic” version of the rules instead of the “advanced” version, and the Middle Earth theme is very light. You’re playing on a strategic map of Middle Earth, but there is almost no other thematic flavor to the cards or rules. Apparently the Advanced rules help that somewhat, by at least allying the forces of Good and Evil on separate teams, among other things.

This game totally hit the spot on Saturday, and I look forward to playing it again. It was a great deal more fun than dying at the hands of the orcs and dragon on the first turn of Wizard’s Quest.