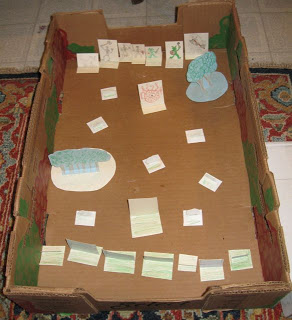 Last Sunday, Martine and I playtested the French and Indian War scenario I intend to play with kids at Martine’s school’s game night. She got bored in about an hour, which is probably good: I expect the game to take about that long, but her behaviour would be a lot better if she were around someone other than her parents. I hope it will play a bit faster with 4-8 players controlling 2 figures each, instead of 2 controlling 8 each.

After that, she wanted to do a craft, and wanted me to give her ideas. So, I drew a goblin and made a little stand-up guy. She took that idea and ran with it: she made a hot dog, whose combat prowess allowed it to deflect any weapon my Goblin was holding, and also to penetrate my shield.

Pretty soon she had an army of 7 hot dogs (with buns, of course) and one boss: a floating green tentacle beast. I had 2 goblins, a troll, 3 skeletons, a wolf, and my boss was a beholder (a giant floating eye with tentacles, I think it inspired her boss).

Then Martine asked me to make 2 trees and some rocks. She made a map to set up the board, a movement ruler and a rock-throwing ruler, and found a cardboard box to use as a playing field.

Then, she taught me how to play:

It’s a remarkably playable game, considering she’s 6 years old and made it up as she went along. There are even discernable tactics possible: hide in the trees one turn, and next turn jump out and attack before they can attack back. The rocks didn’t seem to affect play much, I’ll lobby to remove them next time.

As far as the rules: I think they were inspired by Hibernia as well as the French and Indian War game. In Hibernia, you take 2 actions per turn, and they’re both movement (and possibly fighting) actions. The miniatures game gave her the movement ruler, die rolling, and damage mechanics.

We haven’t finished a game, and might never finish it with these rules, though she did teach her friend how to play today. She had a wonderful time creating it, and I think that’s the most important part.