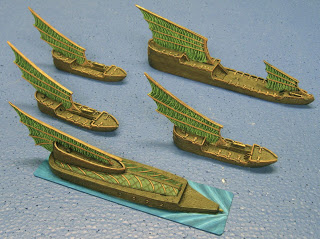 I’ve finished painting a bunch more figures that I need to add pictures for. Most recently, I completed these additional ships for Uncharted Seas.

In the rear is another Battleship. In the middle is a squadron of 3 cruisers, and in the front is a Dragon Carrier.

Most of the ships are following my previous paint scheme very closely. I altered the specific colors used to dry brush the sails slightly, and darkened the ballistae somewhat, but it’s otherwise the same.

I wasn’t sure how I wanted to paint the topside of the Carrier. I’m not sure what the surface detail represented. I settled on a green that could be interpreted as dark weathered copper. I’m a bit surprised the colors go well together, because now I have a yellow-green, blue-green, blue, and yellow-orange on the same piece.

Frank and I haven’t had a chance to play Uncharted Seas again yet, but we have an ocean to play on now: I painted the other side of my outer space terrain board blue.

I’ve received the Firestorm Armada ruleset, also from Spartan Games, but I haven’t started reading it yet. I’m underwhelmed by the models. They’re probably much more impressive in person, since they’re upwards of 6″ long and very hefty. But they don’t make me want to paint them. If we play the game at all, we will most likely use our Battlefleet Gothic ships, or I might find some Battlestar Galactica ships to fight with.