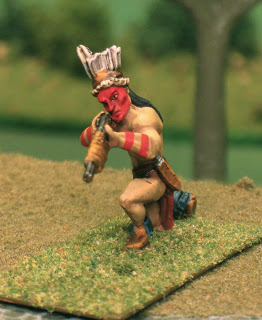 In January, Martine’s school is having a Family Game Night. Being the miniatures gaming nerd that I am, as soon as I heard this was going on I decided to prepare a kid-friendly miniature wargame for that night.

I decided the rules in Big Battles, Little Hands would be a good place to start. This is a great sourcebook for introducing kids and their parents to the concept of miniature wargaming, and provides two simple sets of rules appropriate for ages 6 and up: Milk and Cookies, and Blood and Swash.

Milk and Cookies is named as a parody of “beer and pretzels,” a term used to describe light and easy games as opposed to picky detail-oriented ones. These rules are designed for fighting battles between fairly large armies. They’re primarily aimed at the Horse and Musket period (in the 1700’s-1800’s), but with some modifications they’ll handle anything from Ancient times up to modern times.

Blood and Swash was developed for pirates fighting swashbuckling barfights, so it’s best for a lot of players, a small number of figures per player, and a tight space. I thought a pirate fight might go over well, so I’d probably go with Blood and Swash and maybe build a few pirate ship decks to play on.

But then, I visited Fort Ligonier and learned a bit 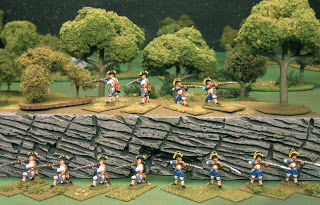 about the area’s local history. I had no idea I was living a mile or two from a French-Indian War battlefield. After a bit of reading, I decided it would be nice to work towards fighting the first few battles in the French-Indian War: Jumonville Glen, the Battle of Fort Necessity, and Battle of the Monongahela.

Jumonville Glen was the skirmish that pushed the French and British to war in America, and eventually across Europe as well, where the larger conflict is called the Seven Years war. A very young George Washington led a group of around 75 Virginians and Indians in an ambush against a party of 30-40 French at Jumonville Glen, and crushed them before they even had a chance to deliver France’s ulitmatum.

The scale of this fight lends itself to Blood and Swash. It’s a simpler ruleset than Milk and Cookies, and requires fewer figures: a bonus, since this is the first I’ve done with the French-Indian War.

I picked up a few packs of Old Glory 25mm French & Indian War figures: British (also suitable for colonial regiments), French, and Indians. I started with 8 Virginians, 4 Indians, and 12 French: enough for up to 12 players with 2 figures each… what a mess that would be if they’re all 6 years old! It also works out to 3 units for each side, in Milk and Cookies… not a lot, but a start.

The Indians were quite fun to paint! I’m happy with how well they turned out. The rest of the guys weren’t as much fun and didn’t turn out as well. The French white coats were the worst, but at least it’s giving me practice shading white. 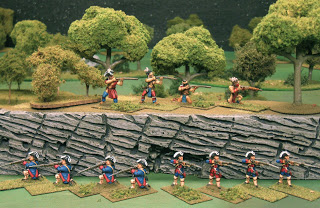 Jumonville Glen has a cliff, where the French sought shelter during several days of rain before Washington ambushed them. I obviously needed to construct this distinctive terrain feature since it’s the centerpiece of the skirmish. I built it as a step hill with a cliff face, out of white styrofoam. This leans towards the “useful” side of the scale, in the “useful” vs. “pretty” compromise that all terrain features have; but it still looks good.

I already had all the trees necessary to make it look like Pennsylvania woods. The only construction left is painting and cutting a piece of canvas to use as a play mat under the terrain.

I’ve been using a few Osprey books as references

for painting these guys. I’m not sure the pictures in Monongahela are very accurate however, since they don’t match the text.

The Old Glory British Firing Line figures are not perfect for either the British or the Virginians, according to Osprey’s images; but they’re close enough to pass for either of them. The French are missing their characteristic cartridge case, and instead have the same bag the British are carrying. I have no clue if the Indians are right or not, but they look cool, and that’s important.

The worst flaw here is my selection for the colonial troops. The Virginians didn’t get uniforms at least until several months after Jumonville Glen, so they were dressed in their own civilian militia clothing. However, since I want to use these figures later in the war as well, I’m willing to compromise. I’d be surprised if anyone (other than Daniel) points this out at game night anyway.

To help increase the number of troops for later battles, I got some Dixon French-Indian war figures on clearance. They’re labelled as “coureurs de bois,” illegal trappers, but they’ll pass as Canadian-born French for use at Fort Necessity and later. I have 8 of those and 4 more Inidians ready to paint now.

In my next update I’ll go over the rules changes I’ve made to Blood and Swash in order to make this a playable and interesting game.