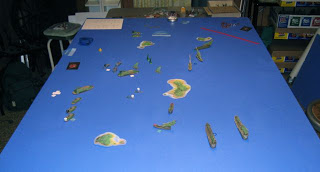 …In which our heroes remember the importance of reading the rules ahead of time.

Frank and I played Uncharted Seas again on Saturday. We didn’t get to the “setting up and remembering how to play” stage until 10pm or so, and then we had to find the rules for all the new models we’re using.

The scenario was a simple “line them up and knock them down” setup since we’re still figuring out how to play well. The game ended up lasting about 3 or 4 turns, which is to say, until we stopped at 2am.

When we called time, I had basically lost: I lost all of my cruisers, all but one frigate, and one wing of 3 dragons from the carrier. My carrier was damaged, but my other models weren’t. Frank had damage on many of his models, making them less useful, but only lost a few carriers and a few frigates.

I learned several things not to do, but I’m not sure what I should do instead!

This presented several difficulties. First of all, my fast frigates were really easy to get too far ahead, where they were stuck out by themselves and got into trouble. Once they were there, they got in the way and acted as a screen, preventing my cruisers from firing through them… until they were crushed. The frigates can only shoot at short range, but once they get that close they’re hosed by the Dwarves.

The other problem Dragon Lords have is difficulty bringing all its guns to bear. To stay at long range, you need to sail around the edges of the table and shoot towards the middle. But if you do that, you’ll only ever get one broadside and possibly minimal front arc shooting. But if you close to get both broadsides into combat, the Dwarves crush you in close shooting.

So maybe I need to use the Frigates as a screen in a more conscious way, or possibly as bait to send the enemy where I’d prefer them to be.

A few problems with the rules are showing their head as well. Maybe it’s just a lack of tactical skill, but I’ve seen this in many miniatures games. When there are both weak and powerful units on the board, the weak ones all tend to get killed off quickly, leaving a duel between a few large units. With large ships being harder to hit by small ones, but killing the small ones much more easily, an equal number of points of small and large ships aren’t really balanced because the small ones can hardly touch the large ones.

The other problem I have with the rules is the specific implementation and maintenance they’re doing with the actual rule book. Spartan Games sells their rule book, but they release rules for new models online instead of selling them. They also make rules corrections and additions available online for free. This is good!

The problem is, these rules additions are spread aross many files and it’s a big pain in the butt to actually use them, especially in combination with the rulebook, which is not available online. The best case scenario would be One Big File of “everything else” you need except the rulebook.

The reality is much worse. To figure out how to handle the Dragon Carrier, I needed to consult 4 different files: the stat card, front; stat card, back; Nogdra Dragon rules; and Flying rules.

Using these separate files makes it easier for Spartan to release a single update, but it makes the rules nearly unusable because you’re not sure which files you need until a question comes up.

I also don’t like the revision control they have on thier rules. They call the files things like “Flying rules- final.” Well, what happens when you change the final rules? Nothing is ever final, but they don’t have any room for new version numbers.

Overall I’m happy and I’d still play the game again, but maybe not 1000 point battles until we’re more familiar with the rules.