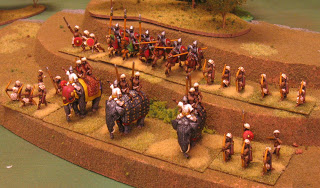 Here is my latest DBA army: Medieval Hindu Indians “other,” army III/10c. The figures are from an Essex DBA v1 army pack, and did not include the Artillery element that is optional in the DBA v2 army list.

The army consists of 1 Elephant General (I choose the one with the red blanket), 2 Elephants, 2 Cavalry, 1 Blade, 4 Bows, and 2 Psiloi. The Artillery, if I had it, would replace one of the elephants. I have a bombard I could paint up for this army, but no appropriate crew yet.

I plan to write more about the individual Essex Elphant models soon, since I have had a horrible time finding any useful information about what they look like and how they should be painted. For now, let’s just say: these things are tanks! The two on the right are very heavily armored except for their legs.

tried to find information online about how the Medieval Hindu Indians should be painted, but I didn’t find anything other than other peoples’ paint jobs, and indications that they were also guessing. Off white is always a reasonable choice, or red if you need some color, since it seems to be one of the most commonly available dyes. The cavalry are the only elements that have much color (other than the elephant). I chose primarily red, with green barding and some blue shirts.

The lances held by the left element here were molded on, so I left them until they break off. On the right, I used Xyston wire spears instead, since they had to be glued in place anyway. 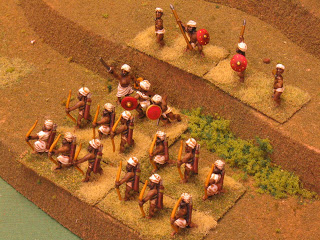 The infantry are easy: off-white butt wraps and head wraps, with red shields. I don’t even know if these figures are appropriate for medieval era Indians; I’d expect them to be wearing a bit more armor or maybe a robe. On the upside, these guys will give me a head start on Classical Indians, and they’re compatible with the Mountain Indian figures I’ve already painted.

Was my most recently painted full DBA army Mountain Indians? It seems odd, I feel like I painted something else in between… I guess that was my 10 other DBA elements for the Persians.