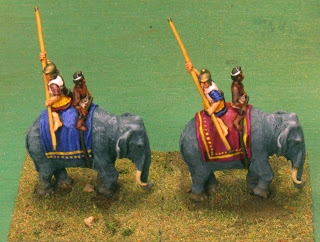 The next elephants in my series of elephant pictures are these Essex miniatures 15mm elephants, MEPA23: Elephant with driver and pikeman.

As with the other Essex elephants I’ve shown, the castings are 3 parts: two body halves and one head. Thes are unarmored elephants for use by the Alexandrian Imperial army and early Alexandrian successor armies. They have a single phalangite with a pike as well as the driver, carrying what looks a lot like a brain spike (emergency brake).

I installed the driver in the wrong place, as far as I know. I think he should be up further on the elephant’s neck, as on the rest of my elephants.

I decided to face the pikeman rearward, based on an article I read in Slingshot issue 260: Elephants and Things, by David Edwards. His conclusions were based on logic, not on historical evidence. He concluded that the only way a pikeman with a 20′ long pike could protect both sides of the elephant without decapitating the driver or knocking him down is if he were facing rearward. The elephant can take care of its own front just fine, thanks. Later, with large crenellated howdahs, riders could stand and move around more easily, but probably still wouldn’t bother lifting the pike over the elephant instead of swinging it around the rear.