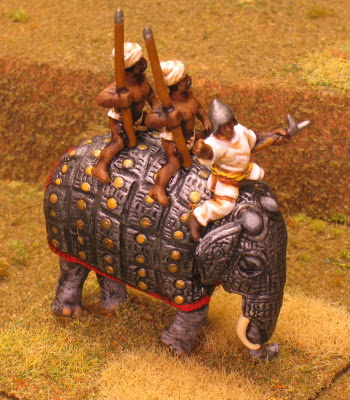 The second elephant in my series of elephant miniature pictures is the Essex Miniatures 15mm elephant MOGE23: Armoured elephant, driver & four javelinmen. It’s an Indian elephant with Indian soldiers helping it along.

Again, the elephant does not fit 4 javelinmen comfortably, so I added only 2. The driver is the same as with the MOGE19 elephant, and all 4 javelinmen are identical.

As with all the Essex elephants I’ve assembled so far, this is a three piece casting: two body halves and one head.

When I saw this one unpainted, I thought “what the heck is that armor supposed to be?”

After a bit of Googling, I found pictures of elephant armor that seems to match the Essex miniature. The actual suit of armor is on display at the Royal Armoury Museum in Leeds, UK. I can’t seem to embed remote pictures very well, so I’ll include links, instead.

Flickr user Gidzy posted a good picture of the armor from above the rear quarter.
About.com has a composite picture with close-up details of the construction.

The armor has areas of metal scales and decorative plates, connected by mail. It is exceedingly detailed compared to the huge scale of the animal, but most of the detail is lost on the 15mm figure. The circles I painted gold on the miniature seem to correspond to larger metal plates decorated with a raised images of elephants and other animals and decorations. The Essex figure had no obvious tie-downs on the side of the elephant, so I painted the fringe and rear ties red instead.

It’s worth noting that the real elephant also doesn’t seem to have room for 4 seated archers as well as the driver!