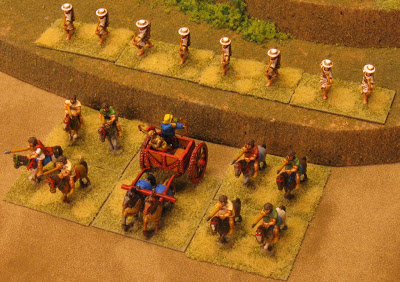 Well, probably not the last, but I painted some more, anyway. 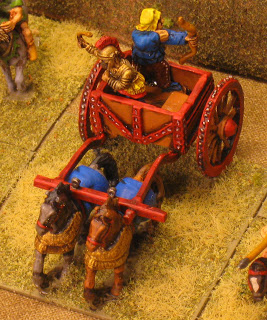 To finish off my DBA Later Achaemenid Persian triple army, I chose multipurpose figures.  Based on the DBM army lists, I chose Cretan archers for the 2Ps elements, which are also allowed in Alexandrian armies, and Paphlagonian light horse for the 2LH elements.  These are Magister Militum Cretan Archer figures and Paphlagonian Light Horse.

I also needed to finish one more LCh or 3Cv element, and since I already have 7 3Cv elements I settled on a chariot.  I know chariots were basically unused at this point, except to help Darius III flee the battlefield more quickly, but they do look good.

The chariot is a bit of a mashup.  The chariot and driver are from Magister Militum, but the chariot was originally scythed.  The Magister Militum 2-horse chariot seemed even more out of place for a Persian army.  The horses are from an Essex scythed chariot that will certainly not fit 4 horses across on a 40mm base.  The archer is another Skythian from my Falcon army pack, painted to look pretty much just like a Persian.

This finishes the figures I need in order to field a triple Persian army.  However, I’ll likely paint a few more eventually.  I’d like to build a 3Ax general and a few Scythed Chariots.  I’ll also paint more Hoplites, because no one can ever have too many of those (if they have any at all), and I’d rather not use Spartans as my Hoplite mercenaries.